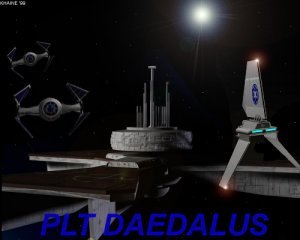 Modified Platform Daedalus is the training center for the TIE Corps. Aspiring pilots who join the TIE Corps are initially given the rank of Cadet and the position of Trainee upon arrival on the M/PLT Daedalus until they complete their training, during which they will learn the basic knowledge and skills necessary for service in the TIE Corps

M/PLT Daedalus houses the Daedalus Military Academy, the prime Imperial Training Centre in the Minos Cluster. The Daedalus is well known to TIE Corps pilots for it hosts the Imperial Weapons and Tactics School (IWATS) in addition to numerous training facilities. All TIE Corps pilots start their careers here, under the watchful eye of the Emperor's Hammer Training Officer and various academy directors, such as the Dean of IWATS. If a pilot would ever want to improve his skills, Daedalus is the place where he should go.

Historically, pilots served a training period on the Daedalus and completed required training assignments before being assigned to an active squadron. As of 2020, the training period and list of requirements have been relaxed, and the Daedalus now serves as a holding place for pilots who have not completed the minimum requirement of replying to the TIE Corps Commander's initial email.

In the past, M/PLT Daedalus was home to game-specific training squadrons.