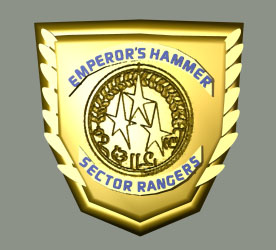 Badge of the SEC 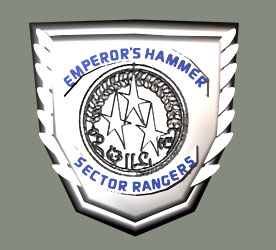 Badge of the SEOs 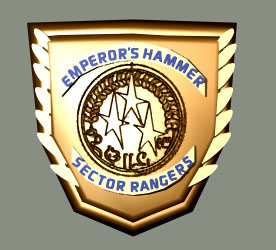 Badge of the SRs

The SRs were taught to be "beat cops", acting as if they were policemen walking a city street. Their mandate was to observe and report any misconduct as opposed to attempting to intervene. The SRs also acted as first-level responders to general questions about the EH and it Subgroups as well as the Security Office itself.

The Sector Rangers were disbanded in 2001 after Slade's assignment to the position of Security Officer. The organization was replaced by the Imperial Security Bureau.

The Sector Enforcement Commission is the law enforcement body of the Emperor's Hammer. We monitor the official IRC channels of the Emperor's Hammer, observing and engaging in chat. We are generally present to make sure that no violations of the Articles of War or Codes of Conduct are occurring, to report them if they are, and to investigate the cases that require further information and evidence.

The SEC is the commander of the Sector Rangers. He is responsible for maintaining the day-to-day operations in the Commission, as well as making the command-level decisions that are necessary from time to time, which include appointing Rangers to the staff and team positions.

The A/T Officer is responsible for ensuring that all incoming and veteran Sector Rangers know the basics. To do this, they have created and currently maintain the Ranger Academy.

Academy/Training is a secondary position. They must be a member of a Team (as either SR or SEO) in addition to their service in the Administration Staff.

The IAO keeps an eye on the internal affairs of the Sector Rangers, to make sure that no Ranger attempts to enforce regulations or neglect their responsibilities.

IAO is a stand-alone position, such that the IAO does not also have to be a member of a Team.

The A/R Director takes incoming applications from members of the EH that wish to be Rangers. He puts them through a short questioning session, then passes them on to the A/T Officer. Any efforts in the area of recruiting will be organized by the A/R Director, but will be secondary to his job taking care of applications.

Applications/Recruiting is a secondary position. They must be a member of a Team (as either SR or SEO) in addition to their service in the Administration Staff.

Roster Manager is a secondary position. They must be a member of a Team (as either SR or SEO) in addition to their service in the Administration Staff.

The SEOs command the Patrol and Investigation Teams, one per Team. Generally, they serve to ensure the training and activity of the Rangers under their command. The SEOs report, patrol, and investigate just like their SRs do. SEO Reports are sent to the SEC and SO weekly.

Making up the majority of the Commission are the SRs. Grouped into Teams, the Rangers either Patrol or Investigate, depending on which Team they're assigned to. SRs report weekly to their SEO, the SEC, and the SO.

The Admin Staff is overseen by the SEC and is composed of the Academy/Training Officer, the Applications/Recruiting Director, the Rosterguy, and the Internal Affairs Officer. The Staff is not in the direct Chain of Command; SEOs and SRs do not report to the Admin Staff.

Each Team is led by an SEO, and the rest if composed of Sector Rangers. Currently, there is a maximum of 15 SRs, including the SEO, in each Team.

Teams are divided into two groups of five members, each called a Squad. The first Squad is led by the SEO, and the other is led by a Squad Leader, which stands as the only unofficial position in the Commission. Squad Leaders are chosen by the SEO under any requirements the SEO chooses to put in place. Squad Leaders may or may not have special duties. Again, this is up to the SEO.

Each week, Sector Rangers report in to their SEO, the SEC, and the SO, detailing what they've accomplished during the week. Even if it's absolutely nothing at all, the SRs are expected to report. SR Reports are sent to the mailing list and their SEO.

Last, the SEC reports weekly as well. The SEC Reports sum up all the things that've happened in the entire Commission in the last week, and often contain the orders for the following week. The SEC send his reports to the the mailing list and the SO.

All promotions are made directly by the SEC, with the approval of the SO. The only exception to this is the unofficial Squad Leader position, which are chosen by the corresponding SEO.