XWAU is a massive mod for X-Wing Alliance, made for free by fans. Its most prominent feature is its graphical upgrades, with more detailed and higher-resolution models. It also allows for playing multiplayer co-op missions, including the game's campaign as well as custom missions.

More information about XWAU can be found at their website, https://xwaupgrade.com/. 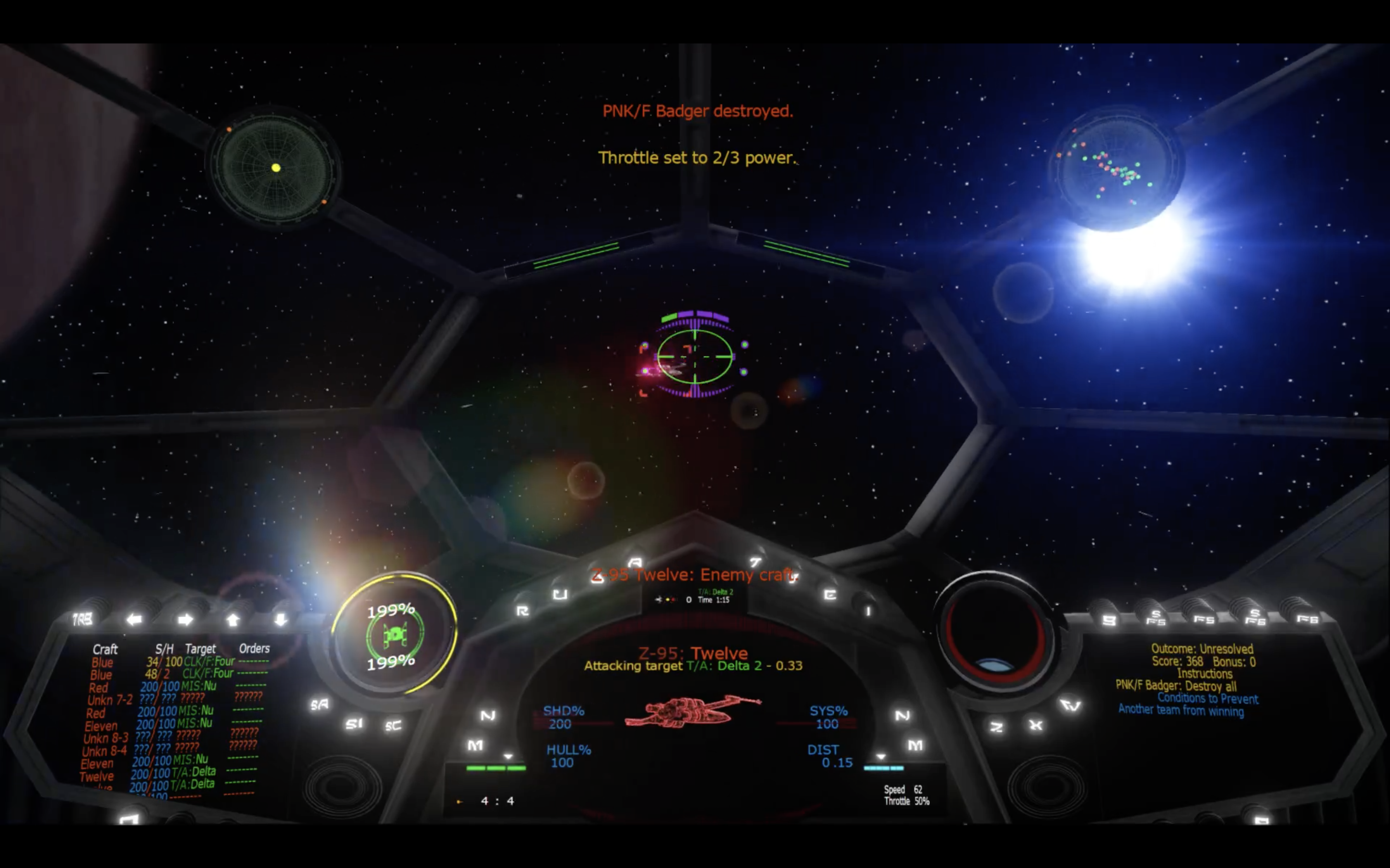 For multiplayer, set GameRanger to look at your XWAU install instead of XWA.

First, you will need to create a clean install of X-Wing Alliance in a new directory, ideally named something like "XWAUP" to differentiate it from your normal XWA install. This is easiest if using GoG, but is also possible with other installs, such as with the CD. Installing multiple copies of a Steam game is currently unsupported.

If using GoG, open GoG Galaxy, select X-Wing Alliance, then click "extras". Download the offline installer and use it to install a second copy of XWA in a new directory named something like "XWAUP". 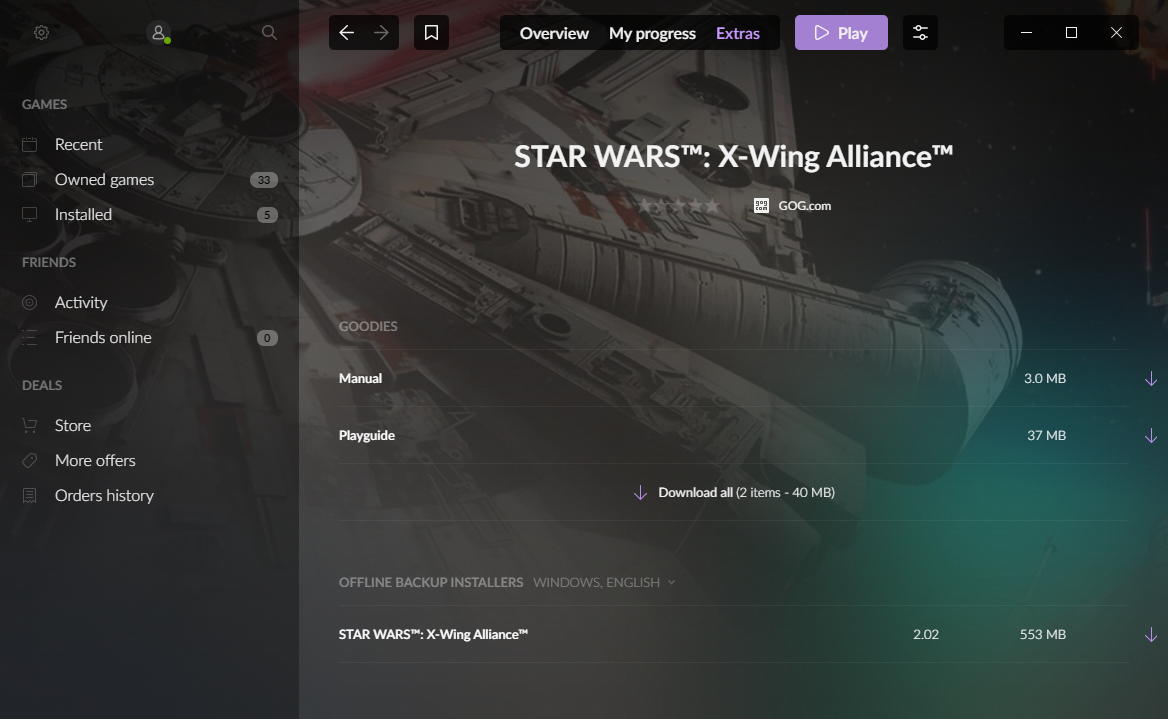 If using steam, download the game from the steam library. Once downloaded if under the play button it indicates Auto-Updates Enabled click on the text to launch the Update window.

Then select Only update this game when I launch it. Next launch the game so Steam can preform its first time setup of the game. Once the X-Wing Alliance Launcher opens, press the Exit to Windows button to close the game.

From this point forward, do not launch the game via steam or any steam shortcuts, instead use the new XWAUP launcher as defined below in Playing the Game. 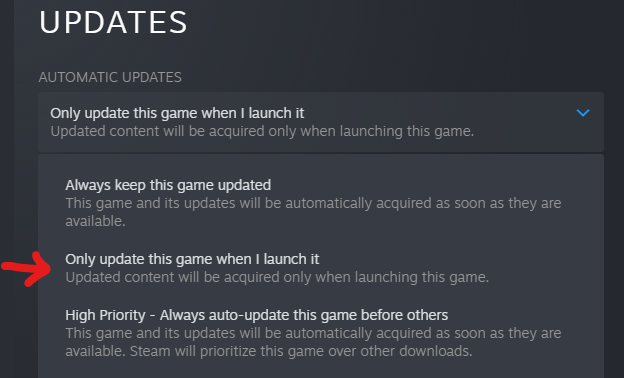 Next, download a copy of the Mega Patch from the XWAUP Downloads Page, as well as the latest Upgrade Pack (XWAU 2020 Update Version 4.0 at time of writing.)

Install the Mega Patch to your fresh XWA installation, followed by the Upgrade Pack. Keep all defaults (although you may modify your graphic resolution ratio.) 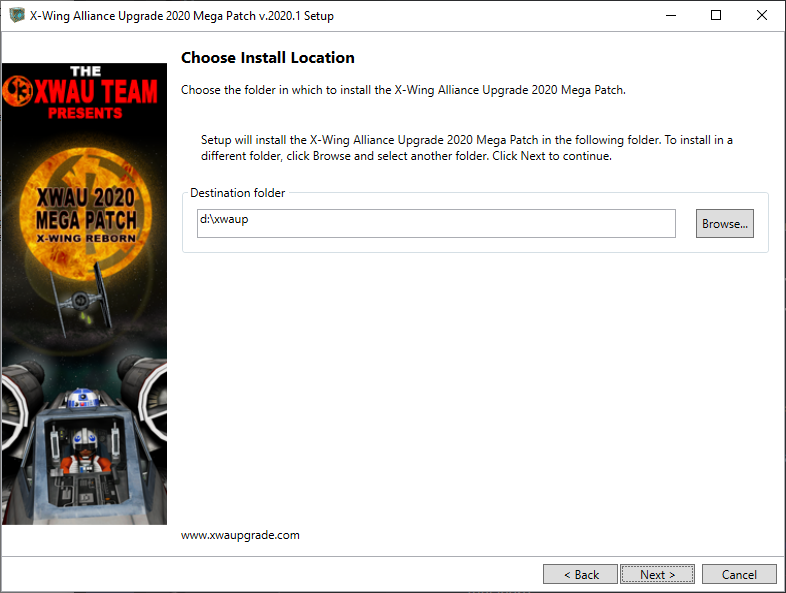 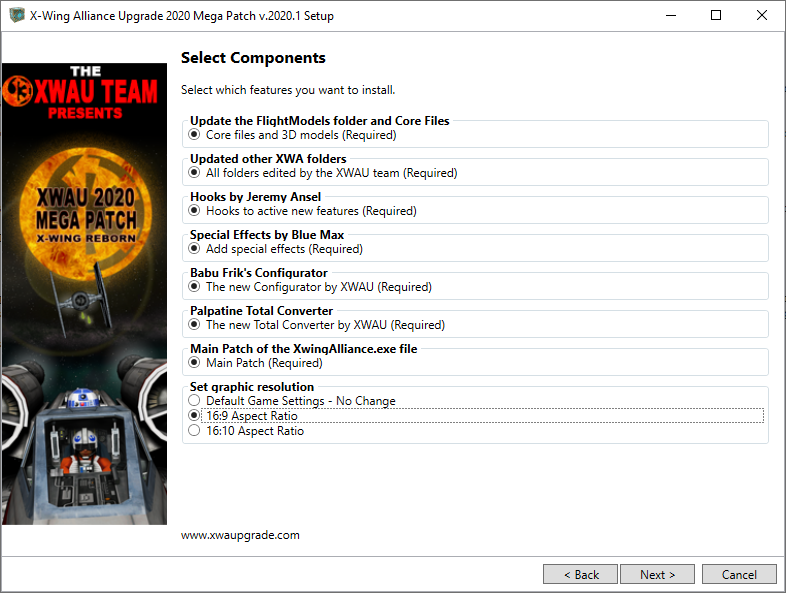 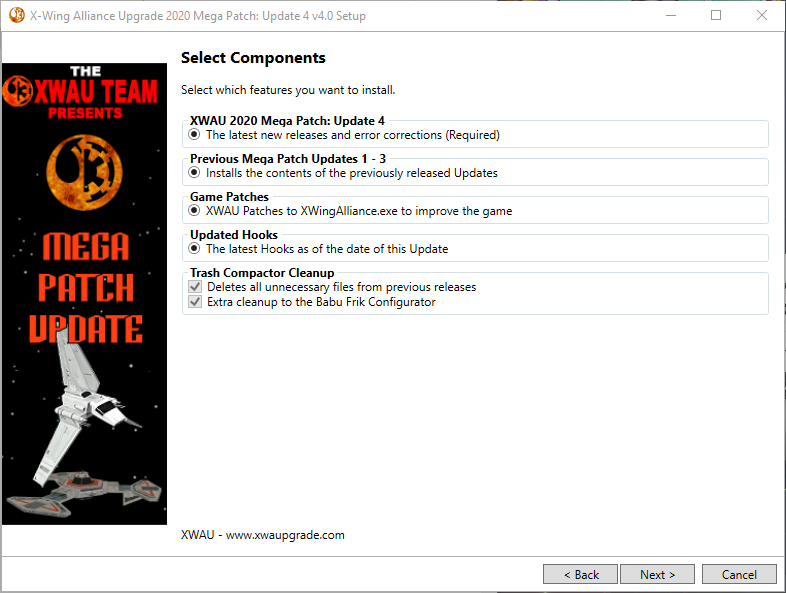 If you used the defaults, you will now see an icon of a Rebel helmet with the text "Star Wars X-Wing Alliance" - this is your XWAUP launcher. (If you chose not to create a shortcut, you will need to find this in your install folder.) The menu will look a little different: 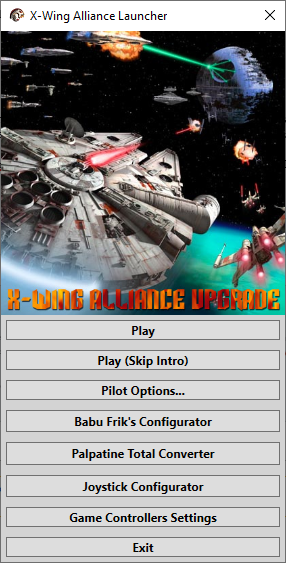 You can play the game as normal. Note that not all singleplayer missions are compatible and may need to be upgrade; but otherwise, the EHBL works as normal. Also note that joystick configuration is now done through the menu, under "Joystick Configurator", rather than in-game.

The COO, as of (date TBD), now accepts XWAUP screenshots for both PvP and PvE rules; standard rules apply. See the COO Manual for details. At time of writing, users will need to take a screenshot of both the setup screen as well as the score screen, showing kills and deaths for all players.

For online matchmaking, it is suggested that all pilots use Gameranger and verify that everyone has standard XWAUP installs (both the Mega Pack and the latest Upgrade Pack.) Failure to use the same versions may result in bugs and lag.

Next, you will need to update your Gameranger settings so that the X-Wing Alliance directory is pointed to your XWAU install, rather than standard XWA.

Afterwards, create a Gameranger lobby, ask your wingmates to join, and press "host". You should now have a lobby open, from which you can choose either a mission (for PvE) or a skirmish (for PvP, or PvE if against AI ships.)

Make sure the update rate is set to the maximum, "59", in your Network Settings. This will reduce "jitters" when hosting. (To do this, press "Escape", click "Network Options", and click on "Update settings": 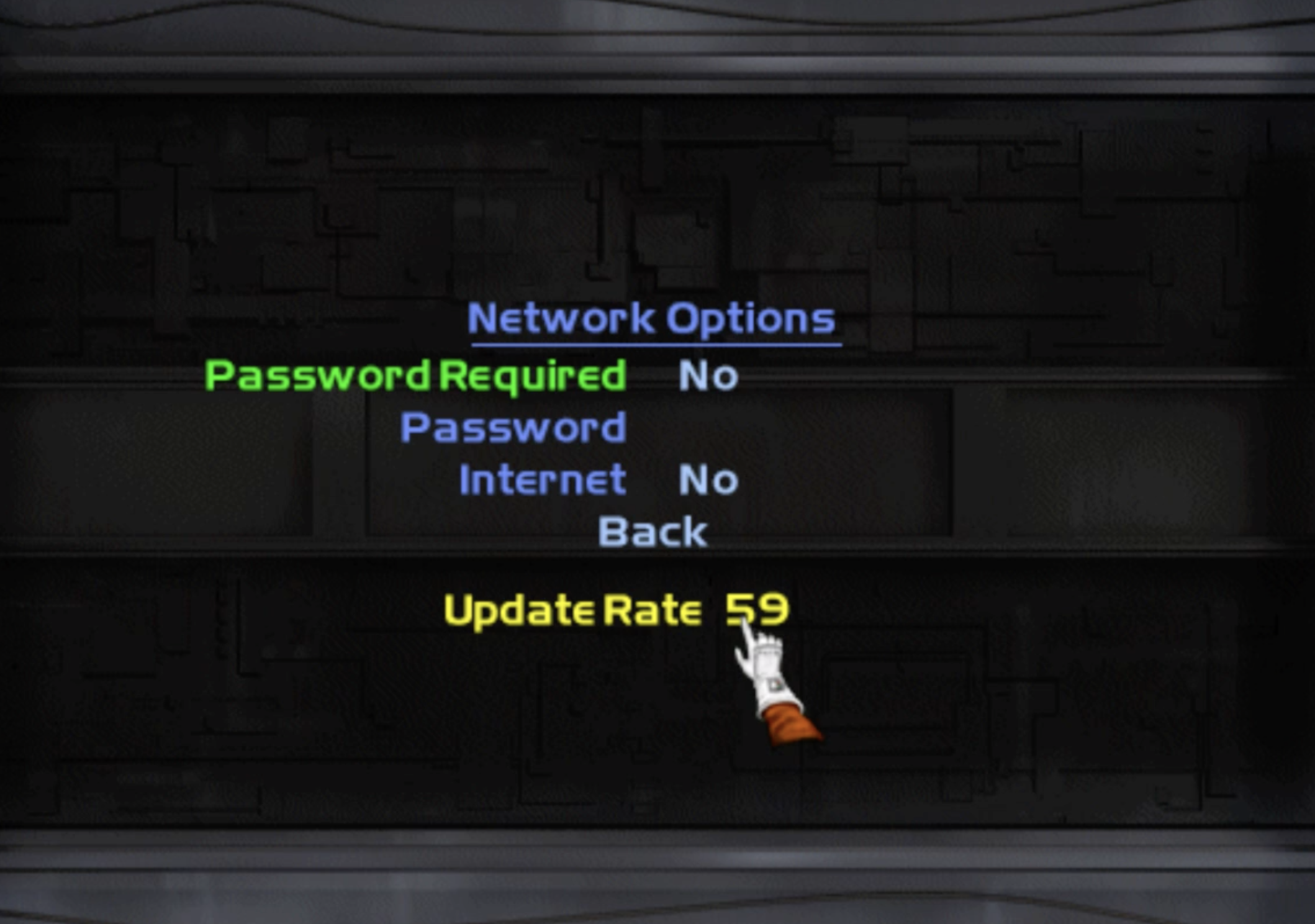 Once everyone clicks the helmet on the bottom left for "ready", the game will begin.

To play custom missions, you will need to add them to your /COMBAT folder and edit the mission.lst file to include them. Tutorial forthcoming.

After the game, the victory screen - which would be used to submit LoSs - looks like this: 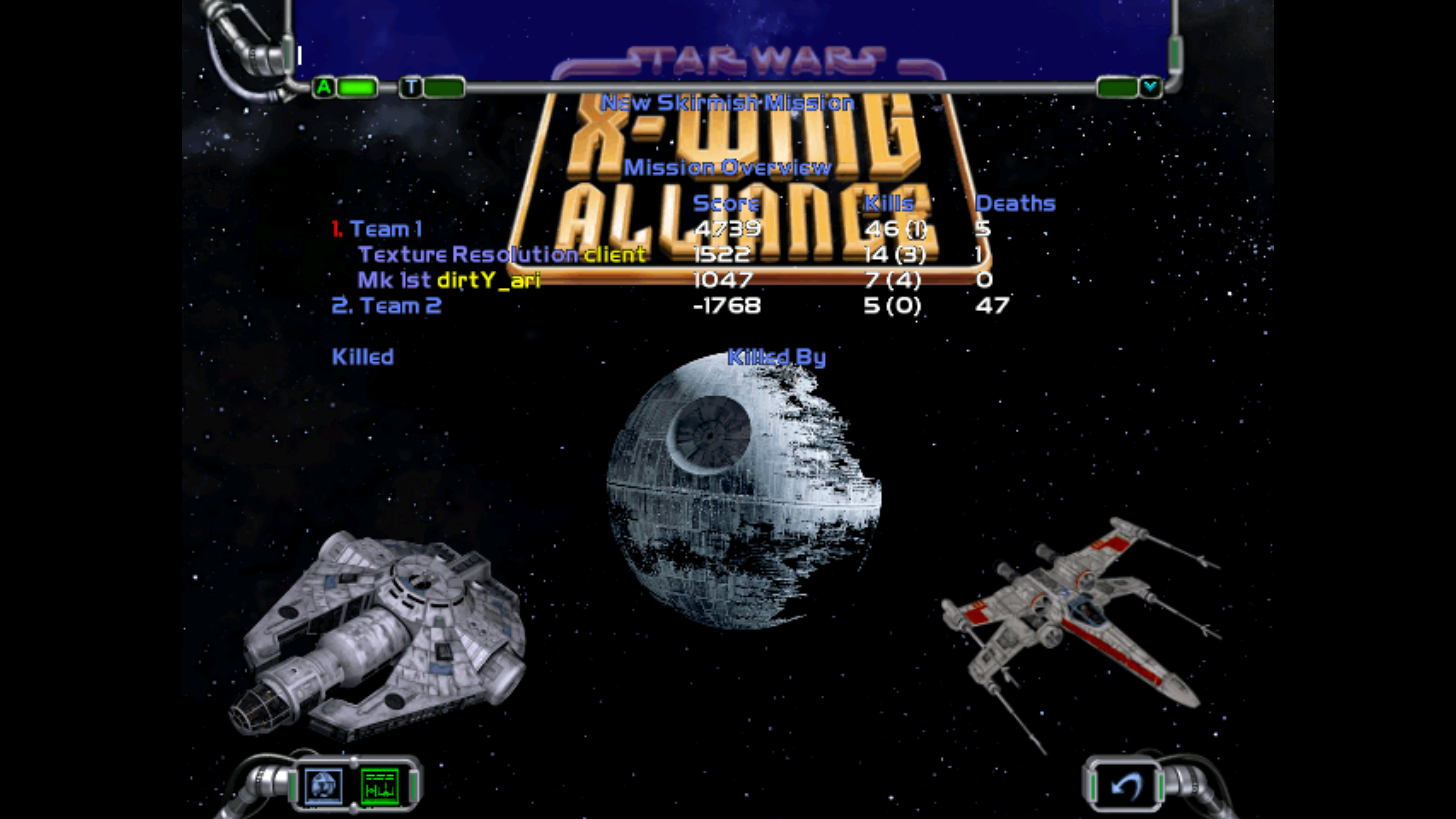