Map of the Star Wars Galaxy[edit] 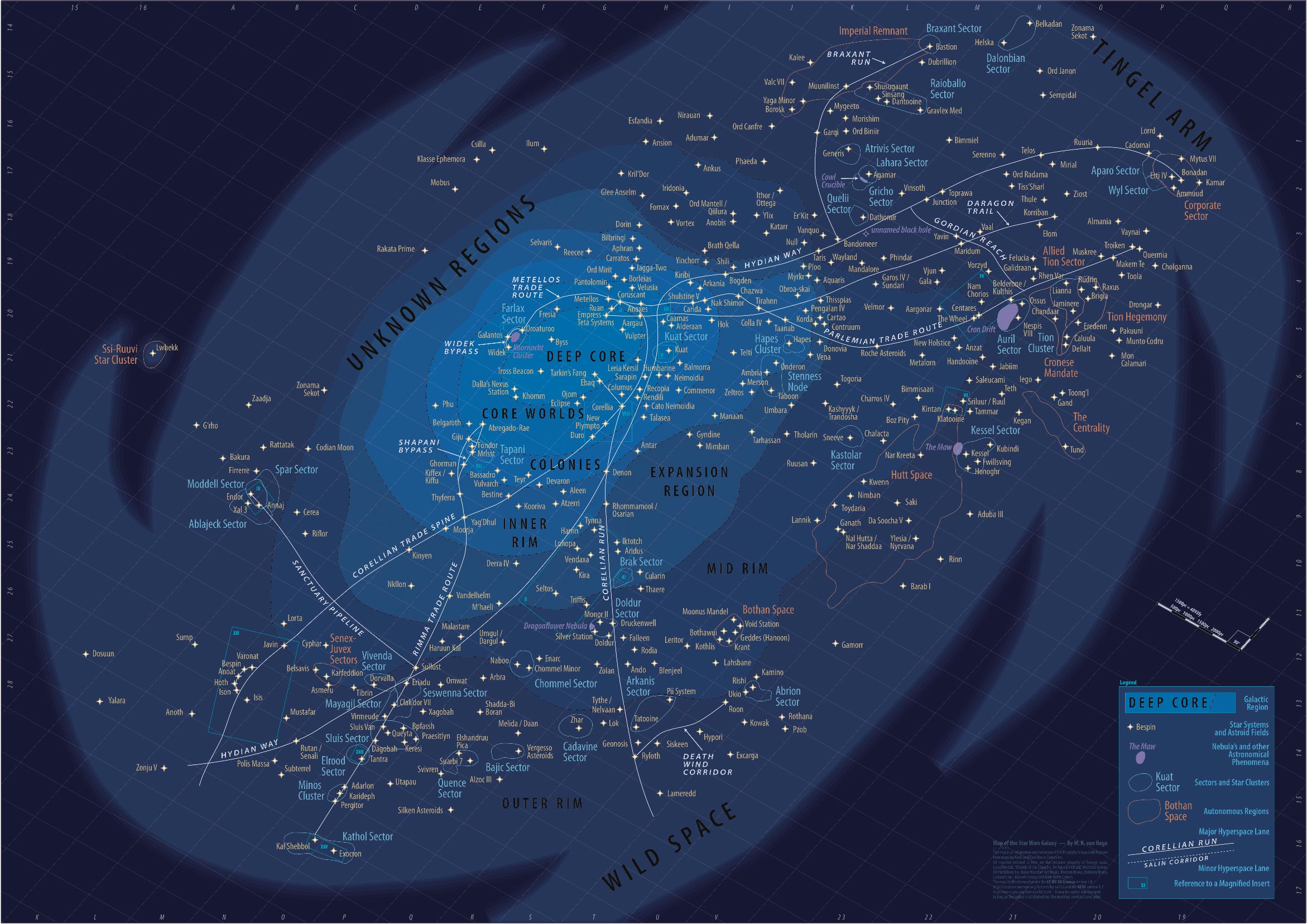 Journey to the Unknown Regions Arc[edit]

Lord Grand Admiral Darth Rapier has sensed a dark presence coming from the unknown regions. After conferring with the current Grand Master of the Dark Brotherhood and the TIE Corps Commander it has been decided that a portion of the Emperor’s Hammer Strike Fleet must move to respond to this potential threat (or potential ally).

To this end the Emperor’s Hammer will be split into two groups: the First Recon Division and the Home Guard.

The First Recon Division will be formed from the most elite ships and squadrons the Emperor’s Hammer has to offer as well as moving the entire Dark Brotherhood on to the SSD Avenger and packing away supplies for an extended stay in potentially hostile territory.

The remaining ships and bases of the Emperor’s Hammer have been reformed into the Home Guard. Centered around the SSSD Sovereign and left under the command of Sector Admiral Kawolski, their sole purpose it to protect what we have and make sure we have a home to come back too.

All Emperors’ Hammer and Dark Brotherhood command staff will relocate to the SSD Avenger with all TIE Corps command staff on their appropriate flag ships.

The First Recon Division will consist of the following ships:

Check the Order of Battle for exact makeup.

Mission parameters include a move along galactic north into the Unknown Regions in the area of Bakura, from there we will proceed cautiously and investigate everything we can find that might give us leads on this hidden dark presence.

The purpose of the First Recon Division is not to engage the New Republic or their allies (though we will if they present a threat to our mission). We will not be stealthy (obviously) but we will not engage unless attacked. The size of the force is designed to deter weaker foes and from what recon has told me forces in the area are minimal but we will be ready at all times.

To all Emperor’s Hammer members:

Feel free to come up with competitions, run-ons, missions, and whatever else you can think of that promotes this new story line.

I leave it to you to fill in the gaps as we reduce our effective Order of Battle and move into a new story arc for the EH.

This January the EH year will become 29 ABY, that leaves the First Order's public reveal 3 years away at 32 ABY and that is what we are working towards. This story arc should take us up to the First Order's arrival in the galaxy proper with potentially some interaction as we investigate the Unknown regions.

OOC: I do not expect to reach the edge of the Unknown Regions before May of next year so feel free to come up with missions and stories that put us up against New Republic forces and even local forces using craft like the Preybirds, Cloakshapes and others from XWA. Also if you have any questions or need any clarification please feel free to message me on discord or send me an email and I’ll be happy to answer

OOC: Missions and fiction can be pretty broad during this time allowing each squad, or battlegroup plan operations on their own with the Avenger as a mobile base of operations. The Plan to acquire the newer NR equipment will be rather extensive and involve the entire TC and the EHDB in an operation that will probably take a month or more to complete and we should see it in the February/March time frame. I do not expect to reach the edge of the Unknown Regions before June so feel free to play in the sandbox we have. Good Luck.

... Battlegroup III crossed the line into the Unknown Region. Commodore Silwar and his ships were at battle stations but no action was engaged and no hostile forces were observed.

... after deploying probe droids and long-range communication satellites I authorized the next jump further into the region.

... we exited hyperspace at the far edge of a system with significant commerce traffic. Commodore Silwar ordered the A/CRS Thunderchild and Hellfire to perform an in-system jump to reconnoiter the situation. General Stryker and Firebird squadron were dispatched upon an alternate hyperspace path in the event the contacts were aggressive against Imperial ships.

...reports were returned from the vanguard that the plant was a trading hub and was not familiar with the Empire. They had vague references to the Old Republic but were otherwise disinterested with the socio-military environment influencing the larger galaxy. I have opened negotiations with the local magistrate, though she gave some other title for her role, regarding the fleet’s use of their facilities.

... two days later I have secured assurances that the rest of the fleet may refuel and enjoy the planet as long as we obey local law enforcement and we are embarking on our next leg of the journey.

The ships of the First Recon Division hung in orbit above Tusorix, the world first encountered by Battlegroup III. Nearly half a million pilots, crewmen, and troopers were planetside after shore leave was granted by the Grand Admiral. Care was taken to keep enough personnel on the ships to defend them if something happened, though that seemed unlikely considering the sheer number of vessels. A veritable cloud of armor and cannons.

Tusorix was a backwater compared to Aurora Prime, but it seemed like a dream after months of being cooped up in the fleet. The cities were large and filled with bars, the countryside was serene and the beaches were plentiful. Transports of all shapes and sizes were ready to take people anywhere they wanted to go at a moment's notice. After a couple of days, the long journey seemed to melt away.

High Admiral Plif was sprawled out on a luxurious bed at a resort near the equator, relaxing after a long day in the sun. His comlink chirped at him. He slowly reached over to pick it up and acknowledge the intrusion in his lovely day.

Commander Doralt from the ISDII Warrior spoke in a rushed tone. "Admiral, we've detected incoming ships. They're heading for the surface at high speed, and there's a lot of them. The Fleet Commander wants everyone back ASAP."

"Any motion towards the fleet?"

"Not yet, they seem to be spreading out for an assault on the planet."

"Do we know anything else about them?"

"We're having trouble getting good readings. They seem to be deflecting our scanners."

Plif clicked off the comlink and hurried to pull on his uniform and get to his shuttle. So much for shore leave. It was nice while it lasted.

The fleet that attacked Tusorix refused to answer hails and only responded to the presence of the First Recon Division when attacked. There were thousands of them and they swarmed anything that threatened them. Fighters faired the best against them because of their maneuverability but larger ships suffered severe damage as the small craft crashed into them until they were disabled and no longer a threat. No ships were lost to these attacks but several Strike Cruisers and Light Cruisers will be spending a lot of time repairing before their tactics were figured out and we left the fight to the Fighter squadrons.

During the fight it was easy to shoot them down, it only took a hit or two and they would explode. Holding down the trigger netted you multiple kills in a single pass until you drained your blasters down to the point they wouldn’t harm the paint.

After several hours of this fight, with no apparent reduction in the number of enemy forces, they withdrew. Gathering at larger ships on the edge of the system and jumping to hyperspace.

After analyzing the after battle reports it appears that their goal was primarily cargo vessels carrying food. They did get away with the contents of several dozen of these and even seemed to attack warehouses on the surface for the same reason. Grand Admiral Rapier brought this up with the Planetary leadership. They thanked us profusely for our efforts in keeping his people safe. He then went on to explain that they were called the Ishtari and as best they can figure out they are hive culture and they show up roughly every 4 months and do the same thing. Strike fast, only attack cargo vessels carrying food or anyone who hurts them, and then leave. They do not know where they come from or where they go. They do not have the military to conduct some operations.

But they would be very grateful if we would take on that task. The Grand Admiral chose, because of the hospitality of Tusorix and not wanting to burn that bridge, to assist in this endeavor.

Plotting their exit vector when they entered hyperspace showed a string of 14 potential systems in a direct line that could have been their destination.

Assigning the Dark Brotherhood to handle 2 of these and other 12 were broken up with each Battlegroup assigned to investigate 2 each.