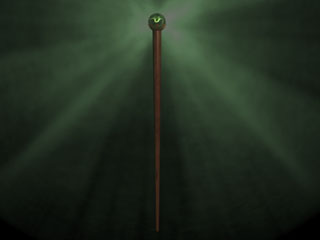 Given by the Chancellor only, this is the highest award in the Senate, given only for brilliant and extended service to the Senate. (Manual 1.57)

The Ch'hala staff is the highest merit award in the Senate, and is made from the prized ch'hala trees which line the Senate paths outdoors. The staff is topped by a large emerald, making the Staff truely unique. Senators may carry the Ch'hala staff when wearing their Senatorial robes, no matter their current position and title. Those carrying the famed staff should immediately be treated with great respect, as the award is rarely given to members. (Manual 3.01)

"For all of his work not only on this database, but our older one, Kawolski does indeed deserve a special award. That is why I award our XO with the Ch'hala Staff, the highest of all Senate awards." - CHS Belzedar Sleygar

"For nearly nine months now, Orv Dessrx has served the Senate as it's Minister of Communications, or as it was formerly known, Internet Councilor. He has designed nearly ten functional websites for the Senate, including two versions of the main Senate page, the new layout for the Systems Manual, my old personal website, the Senate Image Archive and others. That is why I also award Orv Dessrx the Ch'hala Staff for his undying dedication." - CHS Belzedar Sleygar

"This member and I have been clashing for nearly the entire time we've known each other. While we both have vehemently disagreed and unquestioningly agreed, there is no one that can doubt his loyalty and dedication to the Imperial Senate. He has served as a Chairman, the Deputy Chancellor, Precentor Martial, and as an Aide. Senator Plif, for his long two years of service, is also awarded the Ch'hala Staff." - CHS Belzedar Sleygar