General (GN) is the highest line rank in the TIE Corps.

Members of this rank were traditionally either Wing Commanders or Squadron Commanders of the Elite Squadrons. The rank was of special prestige, as it was rare for a member to serve for long enough and with enough ability to achieve the rank. 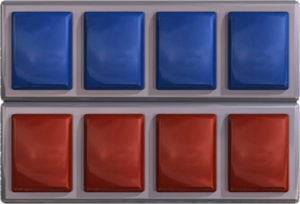 In the original TIE Corps rank system, General was not the highest but in the fact the lowest of the line ranks. It was given to new members.

The old rank insignia for a TIE Corps General