Praetorian Squadron was a joint Intelligence Division and TIE Corps special operations squadron, one of the TIE Corps' four designated elite squadrons. It is currently decommissioned.

Praetorian Guard (n.) 1. The elite bodyguard of a Roman emperor, approximately the size of a legion. 2. A member of this bodyguard.

"I pledge unto thee, firey demons of Praetorian,
defenders of the name and honor of elite, Bravery,
Fidelity and of most importance, my undying Loyalty.

I vow to you, my supreme director and my commander,
my limitless courage inspired by your legacy of glory,
and my supreme obedience unto death.

Praetorian is commanded by the Squadron Commander, who reports directly to the Emperor’s Hammer Flight Officer and to the Supreme Director of Imperial Intelligence. He is responsible for all aspects of the operation and management of the squadron. He holds a minimum rank of Lieutenant Colonel, and a maximum rank of General.

Assisting the Commander is the Executive Officer. He assists with the day to day management of the squadron and its personnel, and assumes command of the Squadron in the absence of the Commander. He holds a minimum rank of Major, and a maximum rank of Colonel.

Two Flight Leaders each command a flight consisting of four fighters (three other pilots). They serve as the first line supervisor for the members of the flight, reporting to the Commander and/or Executive Officer as appropriate. They hold a minimum rank of Commander, and a maximum rank of Colonel.

The Heraldry Officer advises the Commander in matters relating to the squadron history, operating procedures, and rank and protocol. He maintains historical squadron documentation and the Standard Operating Procedures. This position exists outside the scope of the traditional TIE Corps squadron structure, and is filled by a former pilot who maintains current squadron membership in this unique advisory role.

Additionally, the following additional duties are assigned by the Commander. They are generally assigned to individual Flight Members within the squadron; however this is at the Commander’s discretion.

For administrative purposes, Praetorian is organized into the same three-flight structure typical to all squadrons throughout the fleet. As such it consists of a maximum of twelve pilots / TIE Praetors, four assigned per flight. Additional TIE Praetors are held in reserve, along with various support craft. 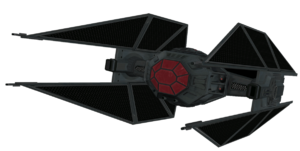 With the creation of the elite Praetorian Squadron, the Fleet Commander commissioned the research and development of a custom fighter to suit its more unorthodox role. Imperial Navy craft engineers began work on a new high stealth/space superiority fighter, now named the TIE Praetor. Starting with a slightly modified TIE Avenger chassis (selected for its compact size and superior maneuverability), engineers equipped the fighter with the latest in advanced Imperial technology and weapons systems. The end result was a space superiority fighter uniquely suited to its role in clandestine operations, while at the same time providing its operator sophisticated systems to enable him to identify, engage, and defeat his foe in space and atmospheric combat conditions. While largely implementing existing technology developed for other advanced fighter craft, the necessary miniaturization of these systems and the high-output power plant resulted in a per-fighter cost nearly ten times that of other advanced craft.

The TIE Praetor was notably equipped with a low-observability skin capable of impairing both sensor and visual-based observation. The red cockpit illumination, intended to deter potential adversaries during higher-visibility escort missions, was deactivated while conducting clandestine operations.

Several derivative models of the TIE Praetor were produced, typically from modifying existing airframes to support unique mission requirements. Most notable is the the TIE Praetor Longbow (T/PrL), in which the cockpit has been expanded to include a weapons officer seat as well as a larger cargo area and bigger engines. These improvements make the Longbow a more versatile fighter than the stock version of the Praetor.

The Praetorian Brotherhood and Ranks[edit]

The Praetorian Brotherhood ranks are as follows. Knowledge of the specific requirements to attain each rank, and the obligation of each, is limited to Praetorian members.

Praetorian Squadron recruits on an invitation-only basis. Candidates and newly assigned pilots are formally evaluated during three phases in the Praetorian Trials. Recruiting duty is performed by all current and former members of the squadron, monitoring the TIE Corps squadrons for the up and coming pilots with the greatest potential. All potential candidates (regardless of whom they are recommended by) will come up for a vote by the Praetorian Tribunal. Generally, the candidate pilot is not aware of this process taking place. Pilots receiving a favorable tribunal vote receive a formal invitation to join the squadron. Those that accept enter squadron at the rank of Nuper. 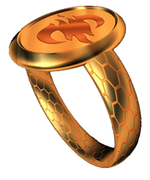 A simple reddish-golden glowing ring used as welcome gift for members upon becoming a full Praetorian after completing the Trials by passing the Praetorian Tribunal and becoming a Tribune - a member of the Tribunal - themselves. The ring serves as the secret hallmark of every Praetorian, recognizable by fellow members when either in or out of uniform. Once awarded, the ring is authorized for wear for life, regardless of a member’s departure from active service with the squadron.

Consists of a Roman-style dagger with a long, thin blade. The hilt is made of silver or gold, and the blade of steel into which the Praetorian motto, “QUO FAS ET GLORIA DUCUNT”, is inscribed. While generally appearing ceremonial in nature, it is designed to be used as an actual weapon – indeed, many Praetorian pilots carry the dagger with them into battle for use should such a need arise. Additionally, the cased Dagger may also be publicly displaced with other Emperor’s Hammer awards.

Golden Dagger – Awarded to members attaining the rank of Centurion in the Fleet Commander’s Honor Guard.

Cortois Ore Dagger – Blade fashioned from the rare cortois ore, each of these daggers is custom-made to the owner’s specification and each one is unique in design. Awarded to members attaining the rank of Executor in the Fleet Commander’s Honor Guard. 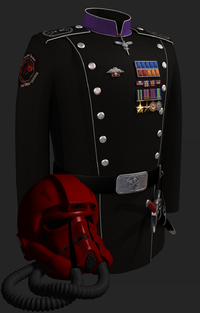 The distinctive Praetorian Dress Uniform sets the Praetorians apart from their counterparts within the Emperor's Hammer. Many pilots seek to wear the uniform, but few are brave and dedicated enough to live up to the standard of excellence that the uniform represents.

The color of the uniform is black, as opposed to the Imperial Blue worn by members of the TIE Corps. The uniform buttons and epaulet/tunic trim are silver in color. These items are unique to Praetorian, and are a tradition carried on from the earliest days of the squadron. This base uniform is authorized to be worn by all active members of the squadron, and is authorized for wear for life by all squadron veterans reaching the rank of Paratus, even after leaving active service with the squadron.

Active pilots within the squadron will wear the purple collar common to the TIE Corps elite squadrons, as well as the unique squadron patch.

The red arm band is unique to Praetorian, and is authorized for lifetime wear on the Praetorian uniform by members reaching the rank of Paratus. The arm band is worn on the left sleeve of the uniform (right side as viewed from the front).

Praetorian pilots wear flight helmets in dark red, with two black vertical "widow's tear" stripes running from the bottom of each eyepiece to the base of the breather unit. The top of the helmet is emblazoned with the Praetorian imperial eagle. Active pilots will wear helmet stripes commensurate with their duty position and rank.