Turtle Jerrar is the current Internet Officer of the Emperor's Hammer. He previously served in the Command Staff positions of Internet Officer, Communications Officer, and Imperial Sovereign Protector, and is a retired Praetorian Squadron member. He currently holds the rank of Fleet Admiral.

Turtle Jerrar began his career on his home world of Corellia by serving in the Corellian Security Force (CorSec). After several years working as a CorSec Police officer, he quickly transitioned to service with the CorSec Tactical Response Team (TRT), an elite commando-pilot formation within the organization. During this service with CorSec he engaged in clandestine internal and external security operations, and maintained close coordination with agents of the Galactic Empire for areas of mutual security concerns.

Around 1 ABY, Turtle Jerrar transitioned from service with CorSec to service in the Galatic Empire. While attending the Imperial Naval Academy he demonstrated proficiency in high performance starfighter piloting owing to his experience in CorSec. Following his graduation from the Academy, he was assigned to a position in the 28th Imperial Fighter Wing where he flew the TIE/IN interceptor. Two years later, he was offered a position in the 181st Imperial Fighter Group, then commanded by Major Baron Soontir Fel. He accepted, and flew with the 181st until the Battle of Endor, when the Empire was thrown into disarray by the destruction of the second Death Star and the death of the Emperor. Jerrar was able to link up with the escaping Imperial Star Destroyer Chimaera, commanded by Captain Pellaeon. He remained with Pellaeon's forces until fall of Imperial Center to the New Republic, when he resigned from Pellaeon's Imperial faction and returned briefly to his home world of Corellia. During this time he performed private missions leveraging his prior training and experience. Within a year, around ABY 5, while conducting a private mission he met up with Emperor's Hammer forces near the Minos Cluster. Seeing the old ideals of stability and order represented in the faction, he again returned to the cockpit of a TIE starfighter by enrolling in the Emperor's Hammer TIE Corps.

From 5 ABY through 7 ABY, Jerrar served in Sadhe and Nun Squadrons assigned to Wing V, SSSD Sovereign. In 7 ABY, he was offered a seat in Praetorian Squadron, a Special Operations squadron organized jointly between the Intelligence Division and TIE Corps.

In 8 ABY, Jerrar was appointed to the Emperor’s Hammer Command Staff and advanced to the flag rank of Vice Admiral. Between 8 ABY and 14 ABY, he served in a variety of roles within the Internet, Communications, and Operations offices and supported fleet-wide operations.

From ABY 14 to 28 ABY, Jerrar retired from active service and returned to Aurora Prime to focus on private interests. During this time, he maintained his status as a Reserve TIE Corps officer.

In 28 ABY, Jerrar returned to active service within the fleet, initially as an Imperial Advisor and then as a Command Staff member.

Following his assignment with Praetorian Squadron and while serving as the Praetorian Heraldry Officer, Jerrar was granted continued use of TIE/Pr airframe #1033, a Mark I TIE Praetor. The ship has subsequently been upgraded to Mark II standard and permanently assigned to Jerrar. Designated Raptor’s Claw, the fighter remains a lethal instrument of Imperial power.

Jerrar maintains and operates a Corellian YT-2000 transport, also designated Raptor’s Claw. The ship is custom outfitted to be capable of serving as a long term mobile base of operations.

In 28 ABY, Jerrar was appointed to the position of Internet Officer. At Jerrar's request, the Victory-class Star Destroyer Stalwart was reassigned from the Special Operations Battlegroup to the Internet Office and designated as the office's flagship. Following the reassignment the ship underwent a brief refit in preparation for its deployment with the newly established Emperor’s Hammer First Recon Division. This also included transfer of T/Pr Raptor’s Claw to the Stalwart. The Stalwart, owing to its previous service in the Special Operations Battlegroup, was already equipped with basic maintenance facilities capable of handling the specialized starfighter. 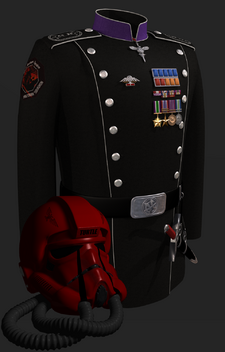 Uniform and flight helmet of AD Turtle Jerrar while appointed to support role in Praetorian Squadron.

Turtle Jerrar has designed the following patches which have been used by Emperor's Hammer squadrons, units, and offices: