Star conflict is a supported Flight Sim for both the TIE Corps and the Dark Brotherhood as of March 2013.

The following was taken from the Star Conflict Steam Page. http://store.steampowered.com/app/212070/

"Star Conflict is an action-packed, massively multiplayer space simulation game that puts players in the role of elite pilots engaging in a widespread interplanetary skirmish.

Three thousand years have passed since the first colonists left Earth. Now the galaxy is divided between the militant star empires and independent mercenary groups. In a remote corner of the galaxy — Sector 1337, the area of the dead — a world has been left behind. Here, the ruins of a great civilization of Precursors have recently been discovered. Huge factories and sprawling cities are falling into decay. Fragments of ships lie on the fields where massive battles were once fought. But there is not a living soul. Everything has been destroyed by a mysterious Cataclysm — a pulsing anomaly that burned out all life within this sector.

This doesn’t stop mankind, the new «owner» of the Universe. Mercenaries and adventurers have flocked to the sector to sift through the ruins and loot its abandoned artifacts, without consideration of the danger. Many have disappeared — including members of well-armed expeditions — but those who have managed to return have uncovered unprecedented riches. So looters continue to come here, to find the Precursors’ lost treasures — and to fight for them."

The game can be downloaded for free through the Steam Gaming Community or Directly from the developer https://star-conflict.com/en

Fighters are a balance of speed, firepower and durability. Fighters are generalists, able to hold their own in combat, while having the speed to accomplish objectives. All fighters are armed with four guns.

Fighters are divided into the Command, Gunship and Tackler roles.

Interceptors are light and fast ships. They are mainly designed for hit-and-run attacks, skirmishing and completing objectives, and do not have the durability to survive in the middle of a large fight.

All interceptors have 2 guns with an increased critical chance, and have a bonus to beacon capture rate.

Interceptors are further subdivided into the ECM, Covert Ops and Recon roles.

Frigates are the largest ships that can be piloted by players. They are considerably slower and less maneuverable than fighters, but much tougher. Frigates are at their best when supporting other ships, such as by repairing friendly ships, denying areas to the enemy and providing fire support from long range.

Frigates are divided into three subclasses:

Engineers and Guards have four guns each, while Long Range are the only ships armed with six.

Active Modules
Active Modules are trigger Abilities/Skills that can be bought or sold and fitted into slots that are numbered One(1) through Four(4). Once modules are placed they can be used by pressing a number on the keyboard corresponding to the numbered location of the module.

The amount of Active Modules per ship depends on the Tech level of said ship. Current ships have no less than two and no more than four Active Module slots. Some modules may be used by all classes of ship while others are specific to certain roles.

Note that Module effects typically do not stack. So if two Command ships are within range of providing an Aegis buff to your ship, only the stronger Aegis effect will be applied.

Designed to improve the characteristics of the ship. Installed in the slots of the appropriate type. The number of slots of each type of modifier on a ship depends on its rank and faction.

Modifiers are divided into 5 types:

Guns are the main weapon used by ships. There are 15 different types of guns in the game, 4 for each ship class - frigate, fighter and interceptor - and 3 that can only be used by specific roles.

All guns have infinite ammunition, but most guns firing is limited by heat build up. Firing for too long with weapons that can overheat will cause your weapons to lock up until they have cooled down again!

Missiles are the Secondary weapons available on all type of ships. There are two types of missiles, Homing and Unguided. Homing missiles require the player to lock onto the target in order to fire (They can also be fired without locking-on and then follow the same rules as Unguided) and can be avoided by using flares or dodging/weaving in and out of objects They are useful for longer ranges when Guns can't reach. Unguided require no lock-on and aren't affected by flares although they can be easily dodged by moving to the side but are useful for close-quarters.

Missiles are loaded in Cartridges. When you expend all of the missiles in your cartridge, it will begin reloading, which is a lengthy process.

Missiles are separated by ship class, with interceptors only able to mount small missiles, fighters medium and frigates large. In addition, there are special missile types that can only be used by certain roles.

There are five tiers of ships in Star Conflict and fifteen ranks. When looking at a ship's tile, you can see its tier in the top-left corner as well as the icon representing its role.

While in the dock, parts can be developed for ships. To open the workshop, press the “workshop” button on the top left or F5. When the workshop window opens, there are three main sections will appear. The far left showing the different types of parts to be manufactured, second to the left shows the available parts to create under that class, and the right showing the required components. 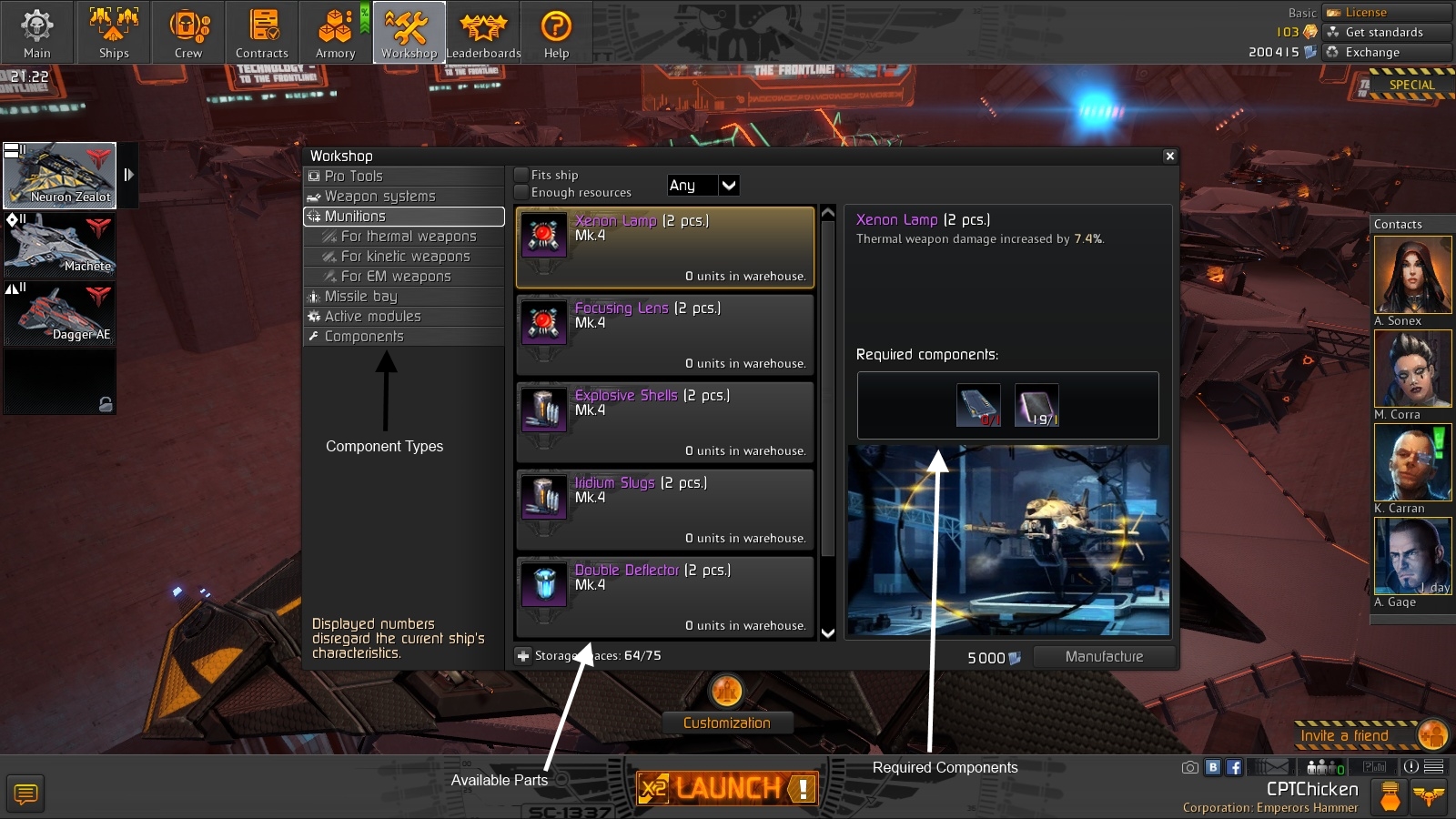 Each component has ingredients which can be collected from exploring the sectors of space, winning PvP/PvE matches, or login rewards. Once collected, the ingredients can be used to produce the part. Simply press the “Produce” button to create the desired part. Once enough of the right parts are collected, the part can be manufactured. The part is then deposited into the armory warehouse to be installed onto a ship.

To install a part, choose the ship you wish to equip it to and put it into one of your active docking slots. Click on the slot corresponding to that part's class (munitions, weapons, etc). A small drop down menu will appear showing all of the options that are available for that ship. If the part you just manufactured meets the ship's requirements, it will appear in this drop down menu. Click on the part and it will automatically be installed onto the ship.

In this Mode you will find 3 neutral Beacons on the map. Each Team starts with 100 Points.

Taking more than 1 Beacon will decrease the Points of the Enemy Team over time. Taking all 3 Beacons will make the Enemy suffer and losing lots of Points in a very short time.

Destroying Enemy Ships will also reduce the Points of the Enemy Team, so even with a Beacon lost you can still achieve Victory.

Destruction of an ally will also reduce the Points of your Team! So watch out when using Weapons of Mass Destruction.

In this Mode each Team has 3 reinforced Stations, that cannot be captured. The only way to destroy them is to use an EMP-Bomb. These Bomb can be found on the battlefield, floating in space.

To pick up a Bomb, fly close to it and your ship will start to pick it up. This may take a few seconds. If you successfully loaded the bomb on your ship, you will be the Bomber that needs to place the Bomb. But the extra weight and radiation of the Bomb will slow your ship down. In addition to that, the Enemy Team will know who has the Bomb and will try to steal it! If a bomb carrier decides to use Special Modules like Overdrive, Chameleon or Tachyon Cocoon, he will lose the Bomb and it can be stolen by the Enemy.

To place the Bomb simply fly close to an Enemy Station, if close enough the Bomb will be set up and you have 3 seconds to flee from it. After that, the Station and its close surroundings will be blown up. Area of the explosion is big enough to damage or even destroy nearby ships. To achieve Victory one team must destroy all Enemy Stations. If both teams fail to do so then Team with more Bomb pick-ups becomes the winner.

In this Game Mode every Team will randomly select a Player and make him the Team Captain. The Captain is able to see any Enemy Ship in battle, no matter if it is cloaked or in cover of an obstacle.

The Captain allows the Team to respawn again if their ship is destroyed. Losing the Captain will prevent further respawns and the remaining ships need to Survive in order to achieve victory. Squadrons of ships will hunt the Captain and you need to protect him, moreover you need to kill the Enemy Captain to prevent the return of any killed enemy. Victory will be given to the Team with more kills or if the Team Captain is still alive.

In this Mode, every Team has 3 Beacons protected by Guard Drones. To gain control of the Sector you must capture the enemy Beacons, while defending your own ones. To do this, you need to destroy the Guard Drones of an enemy Beacon and fly close to it. Your ship will start hacking the Beacon Systems and if enough time given, the Beacon will be disabled.

To prevent the loss of a Beacon you can assist its Firewall and restarting the Systems if you are close enough. The current durability of a Beacon is displayed for both sides. Guard Drones cannot be started again if they are destroyed. To stop hacking a Beacon you can also attack the hacking ship.

The Fleet will not be able to compensate any losses and you can only use the ships you have taken into battle. Any loss will weaken the fleet and upon losing all Beacons or all ships, the battle is lost.

Submitting Screenshots for 24/7 Legion of Combat[edit]

To qualify for a Legion of Combat you must:

Submitting Screenshots for 24/7 Legion of Skirmish[edit]

To qualify for a Legion of Skirmish you must:

Submitting Screenshots for a Cluster of Fire[edit]

For active Dark Brotherhood Members Email a qualifying screenshot to both the Current Master-At-Arms and the Consul of House Drakonan. All Cluster of Fire medals are awarded once a week typically on Saturdays. So any submissions from Sunday through Friday will be tallied and awarded on Saturday.

Qualifying Screenshots for the Dark Brotherhood[edit]

In order to get your future CoF's for Star Conflict or other MP activities that are rewarded with a CoF you'll have to send your screenshot(s) no later then 7 days after you played the match to the Master at Arms and the Consul of House Drakonan. Any screenshot sent later then 7 days after the match was played will be counted for activity only, but not rewarded with a CoF.

This is to prevent accumulation of screenshots to gain an advantage in competitions or similar situations.