Epsilon Squadron is a Psychological Warfare squadron assigned to Wing I on the Imperial-II Class Star Destroyer Hammer.

Epsilon Squadron is one of the first six squadrons created to house pilots in the Emperor's Hammer.

It is not necessarily clear when the pilots of Epsilon developed the formula for Epsi-Cola, now a galaxy-wide famous beverage and the drink of choice for many sentient beings.

Motto - "The Emperor's Will"

Motto - "We bring the darkness" 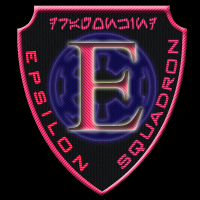