Pel Morba was born on Eriadu, capital of Seswenna Sector and home of Grand Moff Wilhuff Tarkin. While still a child, Pel showed great aptitude for flying. He received admission to the prestigious Academy of Carida, graduating shortly before the Battle of Endor. Pel learned of a mission to set up an Imperial bastion near the Minos Cluster and volunteered to scout for the Emperor's Hammer Task Force.

Adopting the callsign "Tuba" Pel became a TIE Corps pilot for Delta Squadron, tasked with reconnaissance aboard SSSD Sovereign. Rising through the ranks, he was promoted to Lieutenant Commander and appointed Flight Leader of Delta's second flight, achieving the designation Delta 2-1. Tuba remained in that position for one year, then transferred to the EH Reserves aboard the Modified Frigate Phoenix.

During that time, Tuba also joined the Dark Brotherhood, rising to the rank of Guardian. Little is known of his activities while a member of the secretive Dark Jedi organization. 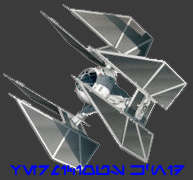 No reasons were given at the time of his retirement from active duty, but it is now known that Pel left the service to marry botanist Valna Celena. The couple settled in a quiet suburb of New Imperial City where Rhial continued her botany research while Tuba earned his living as a flying instructor. Three years later their first daughter, Tessa, was born. A second daughter, Jiloy, followed two years after, and the family settled into a happy, quiet life.

The Morba family's idyllic existence was shattered the morning of the Aurora Prime attack. Pel taught airspeeder flight lessons while Valna and the girls were in the family home just outside New Imperial City when turbolaser fire rained from orbit. The civil airfield Pel utilized was remote enough to fall outside the bombardment zone, but his family was not so lucky. Pel's long-dormant Force senses abruptly woke. Through them he felt his family's terror at the verdant destruction marching toward them, and their deaths when the searing plasma obliterated the Morba home.

Pel's rage, previously quenched by his love and devotion to his family, erupted in a primal scream. The next hours are still missing from his memory, but the reborn Sith found himself many kilometers from the airfield, kneeling at the site of his family's demise, surrounded by their corpses and flaming debris. At that moment, his purpose crystallized: Revenge.

In the wake of the Aurora Prime Massacre, Pel rejoined the Emperor's Hammer. Desperate to avenge his family's murder on any front, the enraged widower volunteered for active duty in multiple units. He reclaimed his old callsign, "Tuba", and set about rebuilding the skills needed to find the murderers and exact vengeance upon them.

Specializing in Cold Assault missions, Pel was instrumental in the final two engagements of the EH Stormtrooper Corps. Advancing to the rank of Private First Class, PFC Tuba participated in the Operation Mongoose: Swoop and Final Strike engagements. As a supplement to regular activities, Pel threw himself into an exhausting training regimen, completing all the HF Courses. One of his proudest achievements was completion of EH Sniper Training and receiving the coveted Korrikar DH-112 rifle, the most advanced sniper rifle in the galaxy. The Hammer's Fist was decommissioned later that year and all members transferred to reserve positions.

Pel rejoined his former unit as a flight member in Delta Squadron under the command of then-Colonel Gilad Pelleaeon. Flying and training as though possessed, he took the training curricula by storm, graduating from 11 IWATS courses in the first month. LCM Tuba became leader of Delta Squadron's Flight 3 in early 20 ABY and maintained that position until transferring to the TC Reserves in 21 ABY. During his tenure as Flight Leader, Tuba participated in making Delta Squadron the TCCOM's Own for two years running, was a regular participant and occasional guest host in GN Pelleaeon's weekly Delta Trivia contests, earned promotion to Major, and became the Ace of the TIE Corps: 2011 after flying 1001 missions that year.

Not content to fight the enemy on his own, Pel became a professor at the prestigious Imperial Weapons And Tactics School, teaching courses on Small Arms and Starfighter Weaponry.

After the trauma of his family's death reawakened his Force abilities, Pel directed most of his efforts to the Dark Brotherhood. Starting as an Apprentice in Heteriae Validus under the command of SBM Blade, Pel participated in that organization's last mission to the Validus homeworld of Lien. After the DB abolished the Hets and reorganized into House Drakonan, Pel participated in every run on and contest the new House offered and completed every Shadow Academy course available, even those normally completed by only the Krath or Obelisk Orders.

Although first commanded by DJM Exar Kit, Drakonan and Pel both excelled under the second leader, MAA/DA Tomaas Montte. Pel joined the resurrected Stingray Squadron based aboard the M/FRG Swift Fury and quickly rose to command the Sith Order. After a brief but successful tour as Squadron Commander, he accepted the position of Aedile, assisting then-Quaestor Montte with Drakonan's administrative duties, including the ongoing Sword of Drakonan monthly activity contest. Pel created the ongoing DB Trivia weekly contest while commander of Stingray Squadron and continues its administration to this day.

After several months as Aedile, Pel accepted the position of Quaestor vacated when Montte became Master At Arms for the Dark Brotherhood and joined the Dark Council. As leader of House Drakonan, Pel currently presides over their mission to root out and destroy those responsible for the Aurora Prime Massacre. Finally, after years of concerted effort, his goal of taking the fight back to those who murdered his family, is nearly realized.

Early in 21 ABY, Pel accepted the position of Command Attache to the Training Officer. In this role, he will assist EH TO/AD Montte with updating,grading, and creation of online courses. Upon appointment to the CA position, Pel was granted the rank of Rear Admiral.