The 7th is a Special Forces Squadron is part of the Wing I, stationed onboard the Imperial-II Class Star Destroyer Hammer. It operates a mixture of Spectre Advanced Missile Boat, TIE Defenders plus a number of support spacecraft in special operations and support of other units.


We use the classic flight sims while maintaining certain tactical flexibility with more modern titles like Star Wars: Squadrons. In practice, we focus on XvT/BoP and TFTC (X-Wing Alliance Upgrade's submod: TIE Fighter Total Conversion) for Single Player (SP) , Role Play (RP) and Multiplayer (MP). We are veterans from past inter-clan competitions who found a home in EH, seasoned EHers with a deep knowledge of the compendium and expert MP pilots mingled with promising enthusiast prospects.


We acknowledge the lag as an element that permeates every part of the internet and the universe, the Force included.


To be part of Alpha Squadron your ping must be over 9000 ms and you must drop all of your internet packets. You won't need them eitherway. You must accept the inevitable: that lag will be with you always, for we are penguins from the endless cold deserts of frozen connections known as Lagtartida. Only Alpha penguins can navigate the dangerous hazards and tap the mysterious effects of the lag always in the Empire's service...

Alpha was first activated in 3 ABY (1995) and originally led by then General Ronin as part of the fighter complement on the PLT: NL-1, along with the other five squadrons that were part of the Emperor's Hammer

In 22ABY (April 2014), the squadron was assigned to the newly-commissioned ISD-II Warrior, reconstituted as Sigma Squadron.

The 7th Squadron was reactivated aboard the Hammer in May 2014.

On 2020, then LC Alejandro Araujo after managing to have the 7th Heavy Assault (HA) Squadron reach Squadron ReMob's goals, considering the squadron's personnel traits and abilities, had proposed TCCS a draft for the unit's mission profile redesignation and after approval, it was formally established as Special Operations Squadron.

7th SO Squadron "Alpha"'s Squadron (7SOS) Standing Orders will be in effect upon publication. Any suggestions for changes must be made in writing to the Commanding Officer, 7th SOS Alpha CMDR.


With the diverse changes in the administrative structure, an "increased flexibility" in expectations from pilots' academic performance on basic military procedures, unfortunately led to unprepared pilots unaware of their regular duties.


To circumvent this state of ambiguity, Lt. Colonel A. Araujo as CMDR of Alpha Squadron, reasoned that same openness on how to run the structure could be used to promulgate Standing Orders, in order to partially restore some of the order of the Old Empire.


Standing Orders, as a written discourse that illustrates the commanding officer's views on how he wants the squadron to operate, provides the crew with the CMDR's leadership style and priorities while also relating to his/her guidance on regular operations; from flight ops to non-flight and admin ops.


Squadron Standing Orders (SSO) are meant to be used on a daily basis by all squadron personnel. They convey the decision-making philosophies to both squadron crew and visitors.


SSO are a set of orders that pilots of the 7SOS are expected to observe at all times. They might be adjusted by the CO (Alpha CMDR) at any moment on a regular basis. They provide an official document about guidance on regular operations and communicates pilots what their CMDR is expecting from them as active members of the TIE Corps.

Alpha Squadron as one of the original six squadrons that comprised the Emperor's Hammer, has a long history dating back from 3 ABY (1995). 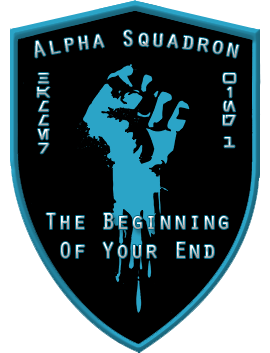 Initially, Alpha Squadron's ranks were filled with average pilot officers with standard training and military discipline. The behavior of fully trained EHTC officers was expected. However, restructuration and other external situations affected the strength of the unit and a lot of positions were vacant. The general mood was a tad gloomy

After new simulations (Release of SWS) were developed, ranks were quickly replenished with capable yet unexperienced pilots with a reasonably good imitation of proper military discipline. While command approved the redesignation of the unit as Special Forces, still,in the eyes of the veteran leadership of the squadron, the pilots lacked training, initiative and discipline. Steps had to be taken to deal with this but it couldn't be done at the moment.

The long journey to search for a dark presence begun and, along with a good part of the fleet, the Hammer (And the 7thSOS) had to sail the unknown regions. The time spent on the barracks took its toll on all personnel, in particular on the less trained and seasoned pilots at first, then those ex mercs with virtually no military discipline imbued on them; a series of personal incidents for some (including depression) and economic pressure for others, made the 7th SOS overall volunteer activity in competitions to drop to a bare minimum. The squadron itself was on a maintenance mode with even then-LC A. Araujo and his XO, COL Pryde, dealing with severe issues that affected their motivation and there was a clear risk of closing the squadron as there was no need for special forces, just regular and recon units running constant exercises and competitions.

In 30 ABY (2022), however, after recon patrols and deep sensor scans confirmed the existence of more planets with large population, LC Araujo , COL Pryde and COL Blackheart, proposed to retake drills for the squadron and internal simulation exercises begun. The interaction with an ex-Imperial colony, the Empire of the Seven Suns and a cult attempting to incite unrest (with the New Republic secretly financing it) brought the need for a Special Operations Squadron back on the table, proving the officers right on the need for a battle-ready unit.

An efficient and comprehensive system for selecting men for it was needed. This was jointly developed by COLs Horus Blackheart and Talons Pryde with LC Alejandro Araujo. In contrast to the regular TC’s emphasis on team work, the formal selection approach combined Pryde’s requirements of fitness and endurance with the Special Operations Executive’s need for initiative when alone in the field. The selection criteria that were finally agreed upon included initiative, self-discipline, independent thinking and the ability to work without supervision, stamina, patience, and a sense of humour.

Given their pilots operational profiles, they often informally dealt with assignments acting as both infantry and pilots and were later given the designation of special forces to formally suit their operational profile. Additionally, unproven and under-trained outfits are thrown together along with seasoned veterans and elite yet undisciplined wildcards who nevertheless have served with distinction. Alpha operatives are provided of their own unique armor set, which differs greatly from the standard issued kit of the rank-and-file and are sent on challenging assignments, less suitable for standard pilots. Each one of the members acquired certain abilities unique to the team and their unorthodox yet often successful tactical approaches to problematic missions other squadrons would refuse to perform if they were given a choice, earned them quite a mixed reputation of exhibiting a concerning level of disobedience, disregard for orders and general dislike of command, especially in the eyes of those officers who preferred a traditional bureaucratic path but on the other hand, it rarely hindered the completion of their missions with nearly one hundred percent success rate. Nevertheless, Alpha Squadron was considered a last resource until the arrival of Commodore Phoenix Berkana who involved the unit in more regular assignments.

At some point, Alpha Squadron met Pengauani mercenaires and inspired by them, acquired the nickname of penguins.

Some of the force-sensitive members of the squadron developed a rare skill of creating time displacement around them (often without control) and worshipped this “lag” as the ultimate truth in the universe.

Alpha Flight I
Nickname - Stalkers
Motto - "No pity, no mercy, no remorse."

Alpha Flight II
Nickname - Scavengers
Motto - "If you don't have a bad attitude, you don't stand a chance"