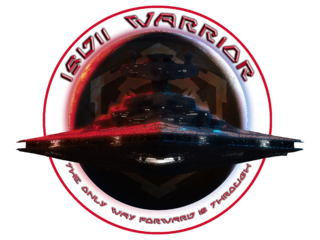 The Imperial-II Star Destroyer Warrior is home to TIE Corps Wing II and the flagship of Battlegroup II within the First Recon Division. The battlegroup is commanded by the Commodore, currently Vice Admiral Marenta.

The keel of the Imperial II-class Star Destroyer SD-KDY-42 was laid down at the Kuat Drive Yards in 8 BBY; one of sixteen ISD hulls that commenced construction in Batch Aleph-2 under then-Moff Tarkin’s expansion of the Navy’s destroyer fleet. Construction of SD-KDY-42 was completed in 16 BBY with shake-down trials completed the following year. In 5 BBY, SD-KDY-42 was officially named the ISD-II Warrior by Admiral Demetrius Zaarin, alongside the Thunderer, Implacable and Stalwart from the same Batch. 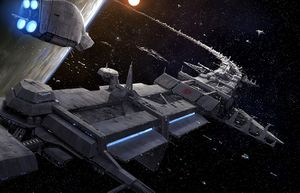 The Warrior’s first assignment was to Battlegroup Omar, under command of Captain Tobias Raya, where she performed protective duties of the system’s TIE fighter research and production facilities. Despite the rare pirate incursion and odd scouting mission into neighbouring systems, this would prove a largely uneventful tour for Captain Raya and the rest of the Battlegroup. The momentous, galaxy-shaking events taking place elsewhere Corewards passed by the Omar system with only holonet mentions of the destruction of the first Death Star at the hands of terrorist dissidents.

The relative calm of the system was shattered in 4 ABY, when turncoat Grand Admiral Zaarin – the same flag office who named the Warrior, arrived in system with a fleet to destroy the TIE fighter production facilities. The Battlegroup was outnumbered and outmatched – Zaarin completely destroyed his targets, but not without taking losses. The ensuing fleet engagement saw the destruction of two destroyers, six medium hulls and numerous lighter craft. The Warrior itself did not escape unscathed, suffering heavy hull damage and the loss of over half of its fighter and bomber complement. With Omar lost and the Battlegroup in tatters, the Warrior’s Captain gave the order for the ship to flee Corewards in the hope of salvation.

It took four months for the Warrior to finally limp into the rings of the Kuat Drive Yards for much needed repair and reconstitution. But the Warrior came back to a galaxy in turmoil. The Emperor was dead – slain according to the rumours by his own acolyte, the dread Darth Vader who himself then vanished in the aftermath of the second Death Star’s destruction.

The terrorists responsible for setting the galaxy aflame then schemed to set themselves up as the so-called New Republic, claiming authority over all worlds. The Imperial fleet was in disarray, with Sector Admirals falling back to their own fiefdoms and enclaves. Other Imperial Admirals, sensing the impending chaos, grabbed what they could before setting themselves up as Warlords in their own right. Barely two weeks into a fraught repair schedule, the Warrior received orders to join Admiral Treuten Teradoc in the Centares system, the hub of the Maldrood sector where he was establishing his own dominion. Captain Raya refused, citing the lack of communication and confirmation of orders from High Command on Imperial Centre. A day later, under the guise of a routine resupply shuttle, a squad of Stormtroopers boarded the Warrior, breached the ship’s command bridge and gunned down Raya. His XO, Commander Doon, promptly dropped docking anchors and set course for Centares.

On arrival in Centares, the Warrior was quickly absorbed into High Admiral Teradoc’s growing fleet. A new Captain was installed, Rear Admiral Kari Bosch and the hangars took delivery of new fighter craft including a complement of 12 TIE Advanced. 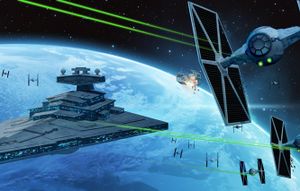 Teradoc promptly put Bosch to task; the Warrior spearheaded Teradoc’s expansion in the wider Maldrood Sector and saw action in numerous fleet engagements with Rebel forces attempting to bring the Warlord to heel. The most significant action took place in 5 ABY over the skies of Togoria, which had joined Teradoc’s Greater Maldrood hegemony the previous year. A large conquering Rebel force engaged the system defence fleet; the Warrior and accompanying fleet of four Destroyers was already en route to consolidate Teradoc’s grip on the system when it emerged from hyperspace into a full-scale engagement already underway. The action lasted for over 18 hours; both sides suffered horrific casualties. Two Star Destroyers were lost with all hands although the Warrior itself suffered only minor damage and the loss of 27 fighters. The Rebels were driven off with a bloodied nose and Togoria was saved.

By 8 ABY, Teredoc's growing rivalry with fellow Warlord, Grand Admiral Zsinj, had erupted into full-scale conflict and for the first time, the guns of the Warrior fired on fellow Imperials. High Admiral Teradoc was growing ever increasingly paranoid and Grand Admiral Thrawn’s failed push for Imperial reclamation in 9 ABY only spurred on Teradoc’s delusions of threat. Bosch, a native of the political power plays of Coruscant, began to grow concerned for the safety of his own position and crew.

Unbeknownst to the squabbling Warlords of the Core, in the far reaches of the Outer Rim an Imperial Warlord had been slowly, quietly, consolidating his own power and authority; Grand Admiral Ronin. Headquartered in the Aurora System, Ronin had amassed a considerable powerbase of fleets and industrialised planets, staying above the bickering of the Imperial Remnant and keeping Palpatine’s New Order alive.

In 10 ABY, High Admiral Kawolski was appointed as Executive Officer of Ronin’s Emperor’s Hammer Strike Fleet. Kawolski was an Imperial Academy classmate of Admiral Bosch. A message was sent to Bosch; it spoke of an opportunity to be part of something close to the Imperial glory of old, absent of politics and power struggles. Towards the close of that year, during a routine visit to one of Teradoc’s supplicant planets, the Warrior suffered a hyperdrive mishap and never emerged from hyperspace.

Bosch had made his play and transferred his loyalty and ship to Grand Admiral Ronin. The Warrior and her complement of crew and fighters was gladly received. Bosch’s first assigned was as lead Destroyer in Battlegroup V, part of the Auroran Homeguard. Not the most glamorous of assignments, but ship needed time to develop trust on both sides.

In 18 ABY, the Strike Fleet underwent significant restructure. By now, Bosch had been promoted and appointed Moff of the Hyperion System. Grand Admiral Ronin had retreated to the monastical life on Aurora and Grand Admiral Rapier now led the Fleet. High Admiral Frodo March oversaw the reassignment of the Warrior to the First Recon Division’s Battlegroup II. With the move came a change to the ship’s fighter complement; Wing II now had a diverse range of craft to enable the Warrior’s new mission: Deep Space Depredation. These changes were not all without rancor. The Warrior’s crew had grown complacent with extended Homeguard duty and its new mission needed their edge sharpened. Admiral March, his tasking of overseeing the changes accomplished moved on, and Vice Admiral Plif took over reigns. In a bid to shake off the lethargy and regain the Warrior’s fighting spirit, the ship undertook several deep space offensive strikes against Rebel holdings. The Warrior performed beyond expectations and solidified its reputation as a hard-hitting ship with an exemplary crew.

Over the next few years, the Warrior produced a number of first-class commanding officers who went on to higher echelons within the Fleet, including future TIE Corps Commanders, Admirals Pete Mitchell and Plif. In 29 ABY, freshly minted Rear Admiral Zekk Terrik, took command of the Warrior. Terrik, having proven himself as a ferocious pilot and CO of Sin Squadron, was tasked by Fleet Admiral Plif to bring the Warrior to the forefront of the Fleet’s expansion into the Unknown Regions.

After Rear Admiral Zekk Terrik's turbulent departure from the Commodore position, that left the ISDII Warrior in need of new direction. Sin Squadron once again provided the person who would take over the WarCOM, High Admiral Mordechi Wolfe, who would lead the Warrior in Raise the Flag for 2021. After some months of leadership, the High Admiral decided that it was once again time to retire and left the position open.

In a series of very odd circumstances, Vice Admiral Marenta Jean assumed the role of Commodore in 30 ABY, right before Imperial Storm IV, and currently occupies this position of leadership for the Warrior.

The following ships and units comprise the Warrior's Battlegroup: