Thunder Squadron is an Assassination squadron attached to Wing X of the ISD Challenge.

On February 13, 2009, Thunder Squadron was decommissioned due to a fleet-wide restructuring, reducing each active Wing to only having two Squadrons.

On July 10, 2020, Thunder Squadron was reactivated to become the second active squadron in Wing X.

Old Thunder Squadron Patch
If there was one word to describe Thunder Squadron it would probably be "Beefy", as in longtime CMDR Colonel Beef. Beef moved on and left the keys to popular CMDR Colonel Azurin Luna, but Thunder's influence continues to extend throughout the Fleet. Fleet Admiral Stuart, former Training Officer was one prominent Thunder Squadron alumnus, having built much of his career there before moving onto first Challenge Commodore, then Training Officer in the Command Staff. Thunder Squadron with its legacy of spam on the message boards and its funky mascot, the 'Thunder from Down Under' boxing kangaroo ('Thunderinians' call it Jaeger, the rest of us call it jumping nightmare, does it matter?) is a vital part of Challenge life. Eventually COL Luna had to step down her command giving space for COL Angel, a long experienced Squadron Commander, Wing Commander and Commodore from the late ISD Colossus to step up and take command of this great Squadron. But... people come and go, and Angel ended being the last real Commodore of this very ship you have been reading about for more time than it's healthy to withstand. After some months with Captain Crsepe in command, Colonel Ric Hunter (formerly Ric Taldrya), all a former Praetorian elite CMDR, took Thunder command and it became of critical importance for the 'Chal' as one of its remaining 4 active Squadrons. With help from the likes of Commander Rue Sokky and Lieutenant Damien Katana, COL Luna and her splendid fictions and graphics, let alone that crazy Lieutenant Tyrian whose relationship with the infamous """super-hero""" Lieutyriant needs still to be proven, Thunder came to be one of the greatest Challenge cards enforcing ship's superiority at Fleet level. Sadly, nothing could have saved it from the ominous Jan 2009 TIE Corps Restructure, for it was an active Squadron and not a closed one and, in order for his decissions to not be looked down as biased, Colonel Domi decided to reopen 2 of our long-closed Squadrons and transfer all remaining active pilots into them to accomplish with the new 2-Squadrons Wings TIE Corps rule enforced by the Admiralty.
Meet the ISDII Challenge, 2009

Motto - Destruction from the Storm Above 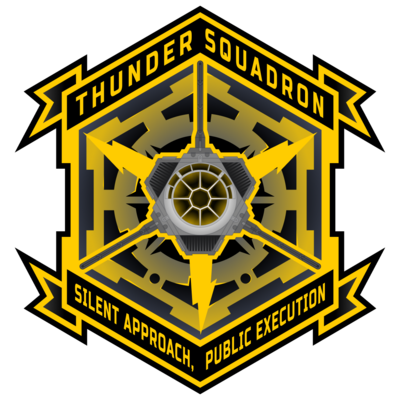 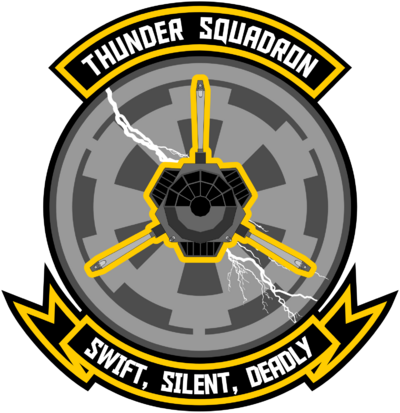