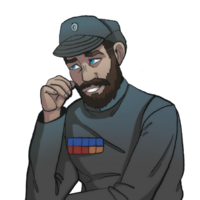 Phoenix Berkana hails from the world of Corellia, and at the time of writing is 48 years old. He was born in 24 BBY to a relatively nondescript family in the city of Bela Vistal in Corellia southeastern mountain range. At the age of 18 (6 BBY) he successfully gained entry to the Imperial Academy, taking a place at the Naval academy on Prefsbelt IV.

More details can be found on the Hammer Website. 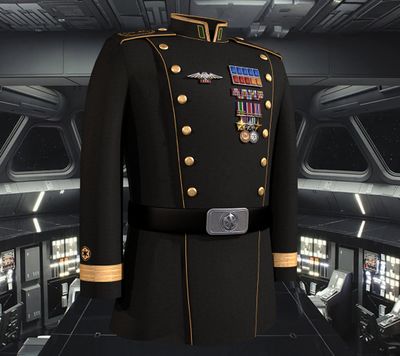 Vice Admiral Phoenix Berkana is the current Commodore of the Hammer, having previously served as Squadron Commander of both Delta Squadron and Thunder Squadron.

He originally joined the TIE Corps back in 1999 in the era of the millennium bug and was a member of Yod Squadron under then LC Guthwulf and served alongside such Yod luminaries as CPT Morth. During this period he also served as Commander of Cheth Squadron and rose to the rank of Major before university life and a career intervened in the early 2000's forcing him to take a backseat on the M/FRG Phoenix. With a return to London in 2016, he found the time to reengage with the TIE Corps and pick up where he left off, with an initial return to Delta Squadron under then General John Clark as a Flight Member. He quickly found himself elevated to Flight Leader and became a ranking member of the squadron which culminated in a job swap with GN Clark on the 1st of January 2017. Phoenix served as Delta CMDR until July 2020, when the squadron elected to follow GN Dempsey over to the ISD Challenge as her new posting was that of Commodore. With the change of vessel Delta Squadron was temporarily decommissioned and recommissioned as Thunder Squadron as part of Wing X. On November 8th 2020 command of Thunder Squadron was transferred to then LC Tygra Shadowclaw, as Phoenix was promoted to Rear Admiral and took command of the ISD Hammer as it's Commodore.

Berkana sounds like a weird choice for a name, but there is a reason for the madness. Back in 1996 there were a plethora of Star Wars clubs on the internet, many of which cross pollinated others. I started my online Star Wars life in a group called the Dark Knights Strike Fleet, several other members in the current TIE Corps also did and this club later morphed into the Crimson Strike Fleet before folding into the Star Vipers around the time of the millennium.

The Dark Knights were led by a Commander who went by the name of Dagron Berkana, and he was also a member of a group called the Obsidian Temple, a Dark Jedi group that had been founded by Melan Pyr as a splinter from the Dark Brotherhood. Much in the way the current DB has houses, the Obsidian Temple had a number including Great House Berkana. Over the years of which I was a member a number of people were inducted into the house as family, taking the surname, either by being the houses ruler or a member of significant standing.

As all clubs come and go, the House was a feature of several different clubs over time - being part of the Crimson Strike Fleet and the Star Vipers before finally taking a back seat. This does however explain why there currently 10 individuals that I am aware of who use the Berkana surname, some of whom are in the EH.