Wreckage joined the Emperor's Hammer in January 2021 and signed up for a tour of duty in Tempest Squadron aboard the ISD-II Challenge. He quickly rose through the ranks, soon taking command of Sin Squadron.

Wreckage was born on Czarnia in 5 BBY. He is was originally known by his birth name Czr Czarnian. His father was a well-respected and decorated TIE Pilot for the Galactic Republic who died in a fatal crash during the Clone Wars. His mother was left to raise him on her own. Losing his father caused his mother to go into a pit of depression. She was physically there, but she was not able to support him in the way she did before. He had to become strong for himself and his mother. So he would quickly become the man of the house.

As expected, he was accepted to Skystrike Academy. He loved every minute of it and learned everything he possibly could. He was given the call sign, “Wrecker,” by his classmates due to all the damage he inflicted in all the simulations. He was fearless, and never shied away from a dangerous situation. He graduated from Skystrike Academy top of his class, with the highest honors. Just like his father. After graduation, he would be assigned to Tempest Squadron, one of the top-performing squadrons of the fleet. While there, he participated in many successful missions and quickly earned many decorated medals while rising through the ranks. He loved his time there. He built lasting friendships with all the other pilots.

One day during one of his days off he would meet his future wife at a cantina in Tatooine. He noticed her immediately. She was sitting alone drinking a Fuzzy Tauntaun. He walked up to the bar ordered a Jet Juice and introduced himself. Her name was Allie and she was a Professor at Tatooine Agricultural Academy. They spent the whole night together, immediately falling in love and got married that same night.

One day when returning from a scout mission, Czr’s TIE fighter malfunctioned and boosted at full speed into the hanger. His body was found barely hanging on to life in the wreckage. This would eventually be how he would get his new call sign, “Wreckage.” The doctors would later pronounce him dead, but they were not ready to give up on him. He was immediately transferred to a top-secret location where they were able to get him breathing again. Experimental surgery and rehab would take place over the course of a few months. Many parts of his body and organs were replaced with cybernetic enhancements to the point where it was not sure if he was more human or more machine.

As soon as Wreckage was cleared for active duty he would take command of Sin Squadron. Very few pilots recognized him as CzR, how could they? Half of him was a whole new person…machine..thing…. He would never take the time to correct them and just kept the name Wreckage. As far as he was concerned Czr died on that med bay table that tragic night and all that was left was Wreckage. The only thing he cared about was getting back in the cockpit to serve the Empire, well that and his love for his wife.

Wreckage’s wife blamed the empire for the malfunction, thinking her husband was dead, she joined the Rebel forces to get her revenge. Wreckage currently has no clue where his wife is and hopes to find her one day so that he can show her that he is still alive, loves her, and convert her back to be loyal to the empire. Any off day he has he spends trying to track her down, but he is beginning to lose hope and feel he may never see her again. 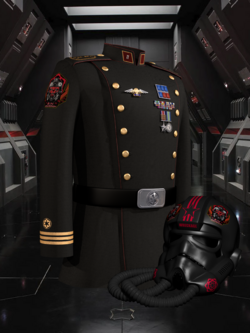 On the right, you can see Commander Wreckage's uniform. He wears this uniform with pride to show his support and dedication for the Empire.