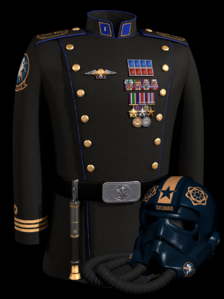 Example of the Tempest uniform; uniform of GN Silwar Naiilo during their time as Tempest CMDR 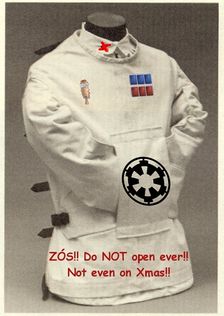 Tempest Squadron campaign Flight suit; as worn by LCM Coldsnacks during engagements versus Remnant and Republic Forces in ABY 29

Compiled by one of the fleet's more famous officers and the last Tempest Commander before its 2009 deactivation, Zósite Kónstyte Styles on the old Tempest Squadron website:

Traditional home of ISDII Challenge and Emperor's Hammer legends like Locke Setzer, Master, Oldham, Indaro Gallia, Daniel Bonini, Prost Varsis, Impulse, Gward, Rover and Sephiroth, Tempest Squadron can claim numerous credits throughout its history. Seemingly always in a competition, Tempest's calling card was its extreme participation under Locke. Then Chris and Master came to keep such participation at the highest peaks with their excellent ToDs as CMDRs. After Master moved on, Tempest remained a top squadron under the leadership of Daniel Bonini, with the capable assistance of his Executive Officer, Commander Impulse.

Even before that? Well, we have recieved response from no other than Vice Admiral Oldham himself with quite useful information on how was the true pre-Locke/Dan history of Tempest Squadron. But who am I to speak about such deeds after all? Please find here the wise verb of "Oldsta" himself:

"But onto Tempest... I think the Squad glory started with me, I don't remember them ever winning anything before, but I could be wrong. I however couldn't take credit for it all, as I had the best Flight Leaders I could ask for with Indaro and another guy I forgot the name of immediately! We recruited, trained and within 4 months became that powerful, we took on Typhoon in a BGCOM competition and won! 6 months later we were taking on Elite Squads and were taking the fight to all squadrons to challenge us! To be honest the exact details of each competition won, medals and honours are very hazy, we're talking about events nearly 10 years ago now." - Vice Admiral Neil Oldham, former Tempest CMDR

Tempest has frequently been on the cusp of greatness, very nearly claiming a "TCBGCOM's Own" and "TCCOM's Own" award over Cyclone Squadron following ECR VII. Sadly, Tempest Squadron had to be shut down, because it was leaderless, after Daniel's promotion to Wing Commander, in a time it could not be leaderless: the 2006 TIE Corps Restructure. Nevertheless, Tempest Squadron's strength kept inside its pilots, and Daniel Bonini who moved from WC to ISD Challenge Commodore, from there to be no less than the TIE Corps Commander (TCCOM - EH Group Commander of the whole TIE Corps) and from there to be the Executive Officer (XO) of The Emperor's Hammer Strike Fleet, only second in command to The Fleet Commander himself, never gave up the idea of making Wing X a seven Squadrons Wing, with the reopening of Tempest.

But time passes by and old nightmares come back to render some lifes miserable from time to time and therefore, following another of those accursed "restructures" on January 2009 with the primary purpose of making all Wings 2-Squadron Wings for the sakes of overall TIE Corps activity improvement, the proud quarters of "The Riders on the Storm" were reopened. The best pilots from the now decommissioned Cyclone and Omicron Squadrons were reassigned into the new Tempest and some crazy upper made from that madman Zósite Kónstyte Styles, former Cyclone CMDR, the new "Wicked CMDR of Tempest".

And well... Dan Bonini who left the XO job after realizing that there was no honour nor pride anymore on sorting paperwork and arguing with EH Command Staffers forever, returned where he always belonged as the true pilot he always has been. Now it's a matter of making the rest of old Tempest glories to come back as well. For the time being: Tempest Squadron has been the most active Squadron of the TIE Corps since the last Fleet Restructure, always ready to collaborate in restoring its former status. As the best proof of it, Tempest was challenged by Praetorian Elite Squadron on April 2009 and claimed victory. Nowadays it would be hard to argue with the fact that Tempest is true elite-material if NOT officially elite. Yet... ;-)

And in case that you need even more proofs, consider this: Tempest Squadron has been recently named "TCCOM's Own" after "Raise the Flag 2009 (lite)" Fleet-wide competition. Finally, we leave the mighty Cyclone behind and claim the title we couldn't get back in the day, the title that officially recognizes Tempest as the best Squadron in the Fleet!!! Did you ever doubt we would get it sooner or later? 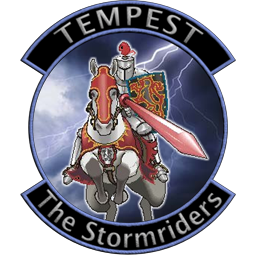 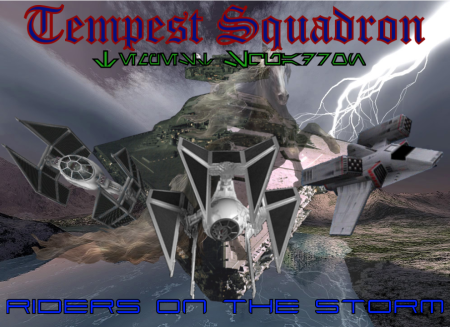