Avenger Elite Squadron (AES) was one of the TIE Corps' four special operations squadrons. It is currently decommissioned, and reflagged as Avenger Squadron (Command Detachment) for the temporary affiliation of members of the TIE Corps and Emperor's Hammer Admiralty.

The squadron was formed prior to July 22, 1999. It was active until at least August 13, 2005. Before the VSD Aggressor became its home, AES was stationed on the ISD Intrepid.

As of 2020, Avenger Squadron (Command Detachment) was established as a unit for otherwise squadron-unaffiliated members of the TIE Corps and Emperor's Hammer Admiralty (Commodores, TIE Corps Command Staff, and Emperor's Hammer Command Staff/Attaches/Imperial Advisors). Affiliation with the squadron is on a temporary and voluntary basis for the duration of specific competitions and events. 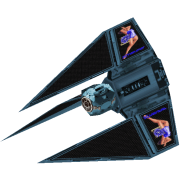 The Avenger Black Shirt is an award that is unique to the squadron, with few having earned it even among the elite cadre of pilots that have flown in the squadron.

Earning it requires an extraordinary amount of combat prowess or exceptional service to the squadron. If a pilot, in a single month, completed any of the following four conditions, they would earn the award

Additionally, a Black Shirt could be awarded for services rendered to the squadron that the commander and both flight leaders unanimously agree is worthy of recognition.