High Admiral Anahorn Dempsey is currently the Emperor's Hammer Tactical Officer Assistant, and the Commodore of the ISD-II Challenge. She has held this position since June 27th, 2020. Since the new restructuring of the fleet in 2010, she has also again taken a line rank, serving as a Major in Delta Squadron of the ISD-II Hammer. Two years later she took over as commander of the squadron when General Pellaeon retired from active duty. It was only a matter of time before she attained the highest line rank possible, that of General. After a long Tour of Duty on the ISD-II Hammer she returned to the position of Commodore when the ISD-II Challenge was recommissioned in june 2020.

After a long time away from Imperial duties, Anahorn Dempsey joined the Emperor's Hammer in February 2007 and signed up for a tour of duty in Cyclone Squadron aboard the ISD-II Challenge. She quickly rose through the ranks, soon taking command of her own Inferno Squadron. Only a few months later, she applied for and was appointed to the Tactical Office as the new Tactical Officer. A month after her appointment and promotion to Vice Admiral, she received a promotion to full Admiral. Another six months later the Fleet Commander rewarded her work with a promotion to the prestigious rank of Fleet Admiral. In the end, she received a promotion to High Admiral, the highest rank achievable. Recently, she was awarded one of the highest honors possible in the fleet: the Medal of Honor. On July 30th 2015 she became the most decorated officer in the Emperor's Hammer when she was awarded the coveted Order of the Renegade, she is now the only officer in the fleet to have both an Order of the Renegade, a Medal of Honor, and twice the Imperial Cross and Grand Order of the Emperor.

Soon after joining the Emperor's Hammer, Anahorn Dempsey travelled to the Yiridia system to become an Acolyte in the Dark Brotherhood. There she quickly rose to the rank of Guardian in Clan Tarentum, and continued her training in the Force. She was elevated to the rank of Dark Jedi Knight, after finishing the final trial for her elevation: the construction of her own lightsaber. For this, Dempsey used a rare, and possibly unique crystal. One forged on the planet Metalorn by an unidentified Sith Lord in ancient times, and handed down to her by Grand Admiral Thrawn. The crystal gives the blade of her lightsaber a rare yellow glow. Soon after her elevation, she was given a brand new battleteam to lead to glory, Hammerhead Squadron. After the restructuring of the Dark Brotherhood, Dempsey took the position of Dux of the Hetaeria named Cethin, a group of Dark Jedi who specialize in the art of assassination. She held this position for 6 months until stepping down in favor of Dark Jedi Knight Jalin Nirtoiz. Upon her retirement as Dux, she was awarded an elevation to the rank of Sith Battlemaster, as well as a Sapphire Blade for the work she had done in the Brotherhood. Not soon thereafter, the Headmaster to the Shadow Academy, Sith Warlord Destavol Gin offered her the position of Magistrate to the Headmaster. Only weeks later, the Grand Master appointed her the new Head Master of the Shadow Academy. Her stint didn't last long as duties as HeadMaster started to conflict with her duties as Tactical Officer, and Dempsey resigned her position. She now serves in Stingray Squadron again.

As Tactical Officer, Anahorn Dempsey's first mission became to rewrite the Tactical database in use, which was in need of modernization. The custom battle submission form was reinstated as the way to submit custom battles, and she quickly started to go through the list of queued battles. Additionally, the Tactical Manual was updated, and a completely new website for the Tactical office was created from scratch.

A few months after her appointment, the Science Officer completed upgrades an a regular Delta-class DX-9 Stormtrooper transport. The craft, the modified Transport Andromeda, has ever since served as Dempsey's personal ship. 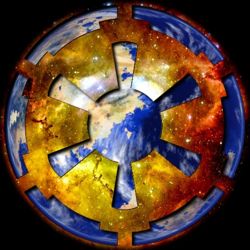 Anahorn Dempsey was born on the 5th day of Selona, 19 years after the Great ReSynchronisation, or 17 BBY. She was born of a Corellian mother while living aboard a Bothan cargo freighter. To this date, her father remains unknown. Anahorn's mother never spoke of him, but Anahorn's conception was not voluntary on her part.

When Anahorn was 10 years old, her mother died when the freighter she served on as a technician was destroyed by Imperial TIE Fighters because it was used as a smuggling ship by the Rebel Alliance. Living the next several years as a slave girl on a backwater world near the Outer Rim, she grew resentful of the Rebel Alliance and everything they stand for, blaming them for the loss of her childhood and the happiness she knew while with her mother.

Several years later, when she reached the age of maturity, she enrolled in the Imperial Navy to become a pilot so she could have her revenge on the Rebels. She flew her first missions in a TIE Fighter under then Vice Admiral Thrawn aboard his flagship, the ISD Vengeance, where she was soon noticed by Thrawn for her exceptional skill in the unshielded TIE starfighters. Within a few months, she was promoted to lieutenant by Thrawn himself, faster than anyone aboard the Courageous had ever reached that rank.

At the time of the Battle of Endor, Anahorn Dempsey served aboard the ISD Manticore. Due to hyperdrive malfunction, her ship was unable to join the Imperial Fleet at Endor, where she was to have played a starring role in the destruction of the Rebel Alliance. Because of the unforeseen betrayal of Darth Vader and the subsequent death of the Emperor, the glorious battle at Endor ended in disaster for the Empire, and ISD Manticore soon joined the Imperial Remnant under Grand Admiral Thrawn, before he, too, was killed.

Shortly after her transfer to the ISD Manticore, she was transfered to the ISD Chimaera by order of Thrawn himself. This was due to the excellent skill she had shown as a pilot under his previous command of the ISD Courageous. On the Chimaera, Anahorn soon rose to the rank of General in Thrawn's Empire, serving as a Bridge Officer on his flagship. Once she was so close to Thrawn so often, it did not take him long to notice her Force sensitivity. The reaction of his ysalamiri was very clear. Her career on the bridge of the Chimaera has always been a mystery to most, considering Dempsey's gender and the fact she was only 26 years of age at this time.

Anahorn had always been interested in the ways of the Force, the Jedi, and the Sith. However, she had always feared the response of the Emperor or Darth Vader should she ever step forward with this interest, and so had hidden it from everyone, secretly learning all she could. It wasn't until she served on the Chimaera's bridge that she got the chance to expand her learning.

Aboard the Chimaera, Anahorn received a basic training in the was of the Force from Joruus C'Baoth, clone of the former Jedi Master Jorus C'Baoth. From him, she learned the meditation and self healing skills the Jedi were famous for, as well as developing her sixth sense and tune it into the Force. For a short while, he even instructed her in the art of dueling with a lightsaber. Unfortunately, it was during her initial instruction here that Thrawn was killed by his Noghri bodyguard Rukh. Anahorn, though present on the Chimaera's bridge a the time, was unable to stop the Noghri. Her senses were not skilled enough to detect the betrayal and act in time to save Thrawn.

This is where her training ended, as soon after Thrawn's death, she disappeared. It is certain that she was no longer aboard the Chimaera when it was called to serve the clone of Palpatine, but the qestions of how she disappeared or where she went were never answered. She has never disclosed the knowledge to anyone.

After this, reports of Anahorn's career are non existent, until recently when she found herself in a region of the galaxy under control of the Emperor's Hammer. She re-enlisted, and was assigned to the ISD Challenge, where she soon took on the position of Squadron Commander. Even though she had held the rank of General in the last reports that mentioned her, she chose to start her career anew, and started as a regular Cadet. But here, too, she soon made a career, taking only weeks to advance to make flight leader. After that, the step up to squadron commander was a short one. Her tenure as Commander if Inferno Squadron didn't last long, as only three months after her assignment, she was appointed to the position of Tactical Officer. 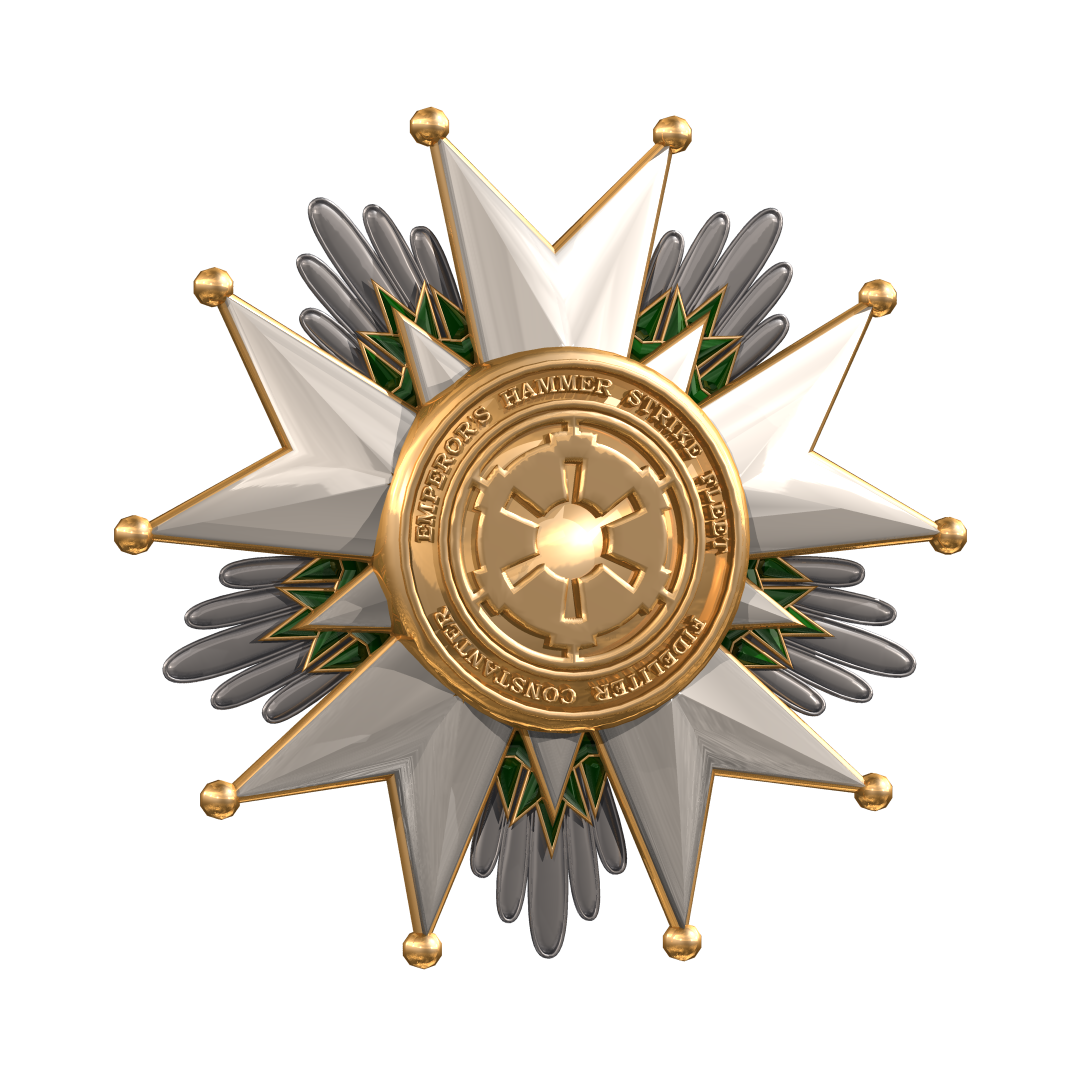 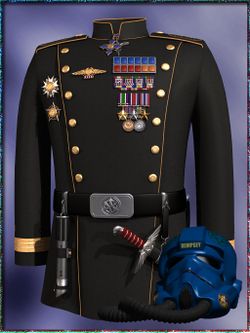 On the right you can see Anahorn Dempsey's uniform. She proudly wears during official celebrations, such as the weekly meetings on IRC when she gives the Tactical Office report. It sports her High Admiral's rank panel and merit medals, as well as her FCHG wings. Since her elevation to the rank of Dark Jedi Knight she proudly wears her lightsaber at her side.

Anahorn Dempsey is (emeritus) professor of the following courses: