Stryker is former Commander of Red Squadron and Firebird Squadron, Wing Commander of Wing XXI, and Combat Operations Officer of the Emperor's Hammer.
His currently commands Raven Squadron of Wing X aboard the ISD Challenge. His current rank is General.
Stryker also holds the title of Sith Knight in the Dark Brotherhood, but is inactive.

Born to a Jedi Padawan on the run from Imperial Inquisitors and a junior officer from the secretive Empire of the Hand in 2 BBY, Stryker's family escaped Nirauan once his father's latent force abilities were discovered. Fleeing to Alderaan under the hopes that their pacifistic nature would keep them safe, they escaped the destruction of the planet by chance as his family were taking a trip offworld at the time. Stryker was orphaned when his parents joined the Rebellion and never returned. Forced to attend boarding school on Naboo where he was mistaken for a Pantoran with a birth defect, Stryker ran away at age 14 and spent several years travelling the galaxy as a stowaway, hiding from the New Republic authorities who would send him back to Naboo - once again a shining jewel of democracy and the corruption that went with it.

Having met a recruiter for an influential but still fringe group of the Imperial Remnant known as the Emperor's Hammer, Stryker was trained and graduated Delta Company of Platform Daedalus and was assigned to Diamondback Squadron as a Sub-Lieutenant aboard the ISD Intrepid. He was quickly promoted to Lieutenant, but never truly settled with the TIE Defender which he was assigned - he'd learned to fly on Incom T-47 airspeeders, and the Sienar Fleet Systems controls were frustrating to work with on a daily basis.

After some time struggling to adapt to the Defender, Stryker requested to join the newly reactivated Infiltrator Wing. He was assigned to Red Squadron as Red 2-1, but soon accepted the job of Red Squadron Commander. His promotion to Commander would mark the beginning of a journey through good times and bad as he began the climb up the promotional ladder. It was during this time that he was able to start exploring the fate of his family thanks to the IW's connection with Imperial Intelligence - his mother had been killed early in the war, while his father, had been killed at the battle of Var-Shaa having been driven to ever-increasing acts of vengeance against Imperial forces.

For three months Stryker led Red Squadron as a Commander. He would be joined by officers like Colonel Gunman, Lieutenant Tirna Q'jira and Commander J'Lek Arcanos. Shortly before the end of his first tour of duty in command, Stryker was promoted to Captain on the recommendation of the Redemption's Commodore, Rear Admiral Exar Kit, and his fellow Squadron Commander, Commander Uther who was leading Green Squadron at the time.

During his tenure as a Captain, Stryker further aided the Tactical Office as a Surveyor and joined the Combat Operations Office as an Assistant to then-COO Ramos Kanzco. Following another successful tour of duty, Stryker was promoted to Major at the request of then-Wing Commander Lieutenant Colonel Pellaeon.

With Vice Admiral Exar Kit retiring, Colonel Pellaeon was asked to step up to Commodore. At first, Pellaeon had decided that Major Iceman would be a good Wing Commander, but after only three months he too resigned his position.


Then came Stryker's turn. With his departure from Red Squadron, Stryker promoted Lieutenant Bodo Dent to Commander and entrusted him with the Squadron he had called home for so long (which would prove to be a mistake that would haunt Stryker for months to come). Wing Command was not easy for the young Major, but he persevered, and was soon promoted to Lieutenant Colonel. A third squadron, Blue, was soon added to the Redemption, and with it came Stryker's promotion to full Colonel.

He would remain in this position for a year, earning the rank of Admiral, before retiring. 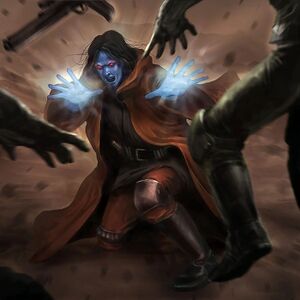 Stryker vs Agents of NRI

With friction in the Emperor's Hammer growing and the position of an Alderaanian expat looking increasingly tenuous despite years of excellent service, Stryker resigned his position, and was listed as a deserter by Grand Admiral Astatine. During his decade of retirement, Stryker and his trusty R6 Astromech Droid "Sparky" travelled the galaxy, working odd jobs and generally keeping a low profile as the New Republic expanded and neutral space was harder to find. This came to an abrupt end just shy of Stryker's thirty-first birthday, when members of New Republic Intelligence accosted him in his apartment, demanding he accompany them and betray his former comrades in exchange for a pardon for "crimes against the Republic".

Though Stryker had nothing against the people of the Republic, he was not about to betray the people who had given him a home. Escaping the Agents (and drawing his Lightsaber for the first time in a decade), Stryker and Sparky fled New Republic space and returned through chance alone to the Emperor's Hammer as it prepared to depart for the Unknown Regions.

Return to the TIE Corps

After being interrogated by Imperial Security and meeting with Fleet Admiral Plif, Stryker was cleared of his desertion charge and reduced in rank to Colonel. Assigned to Sin Squadron aboard the Star Destroyer Hammer, Stryker's experience was noted by Squadron Commander Zekk Terrik and he was soon installed as a Flight Leader, helping lead the squadron to fourth place out of the ten squadrons competing to be the TIE Corps Commander's Escort squadron. During this time, Stryker composed a report detailing the usefulness of Infiltrator squadrons not as a dedicated wing with their own special missions but as part of the TIE Corps as an infiltration and training tool. This was recognised by members of the Admiralty, and Stryker was once again called to command an Infiltrator squadron aboard the Star Destroyer Challenge under High Admiral Dempsey, who had been a Squadron Commander and then Tactical Officer before Stryker left Imperial service.

After a brief stint as Galeres QUA, Stryker began to suffer from ill health and was forced to step down.

Stryker also fulfilled duties as a Tactical Surveyor, Professor of the Basic Flight Maneuvers course at the Imperial Weapons and Tactics School and Pontiff of the Imperial TIE Fighter Course at the Shadow Academy.