Firebird Squadron is an Infiltration squadron assigned to Wing X on the Mon Calamari Light Cruiser 40 Roost. In October 2020, Firebird Squadron became the fourth squadron activated in Wing X, having formerly been stationed aboard the MC90 Warspite. 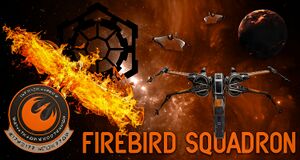 Firebird Squadron were founded as a reconnaissance unit for the old Infiltrator Wing. Originally equipped with A-Wings, Firebird were a reliable but unremarkable squadron when it came to performing their duties and scouting ahead of Battlegroup XVI. Never covering themselves with glory thanks to their role, they were often overshadowed by more famous Infiltrator Wing squadrons such as Shadow or Knight, so it was a surprise when they were selected to accompany Grand Admiral Rapier's expedition into the Unknown Regions.

Re-equipped with upgraded T-65 X-Wings and BTL-A4 Y-Wings, the squadron was placed under the command of General Stryker, a veteran of Red Squadron aboard the MC80B Redemption. Their mission would be twofold: traditional Infiltrator Wing false flag operations against the New Republic, its allies, and other enemies of the Emperor's Hammer; but also to act as an aggressor squadron for training purposes to give new pilots a chance to fly against the ships they would be facing outside of the simulator.

To facilitate this, Stryker ordered the Firebird Squadron craft painted in a bright orange and grey paint scheme, imitating General Hera Syndulla's famous "Starbird Squadron" of the early New Republic, now known as the New Republic Precision Air Team. This, he believed, would lend credence to their continued use of older craft and allow them access to areas of the New Republic that line squadrons might not necessarily have clearance to enter.

The squadron integrated well and quickly despite the mocking of their comrades-in-arms. Instilling a sense of identity he had picked up from other Infiltrator Wing veterans, Stryker led Firebird to victory in a wing-wide contest organised by High Admiral Dempsey - the victory was bittersweet as it was almost immediately followed by the departure of three reliable pilots to form the core of the reformed Eagle Squadron. This came with its own benefits, however, as it was a sign that the Infiltrator Wing was seen as a useful component of the TIE Corps, and may soon be allowed greater independence in the form of their own ship.

Following Challenge's domination of TIE Corps in Battle Season 3, the members of Firebird were granted the opportunity to select new craft for each flight. After much debate, Flight III chose the A/SF-01 B-Wing while Flight II decided to utilize the payloads of the BTL-A4 Y-Wing. Flight I chose to remain as the vanguard squadron with the venerable T-65 X-Wing.

After the successful completion of the Remobilization Exercice Edition 4, Firebird changed up his objective and the fighters of Flight II and Flight III. To return to the squadrons old roots, Firebird choose to adapt once more Reconnaissance as Objective, while replacing the Y-Wings and B-Wings with RZ-1 A-Wings.
Captain Taurus decided once more to keep the X-Wings for Flight I to provide a better utility to his Squadron and widen the field of opportunities Firebird could take part in.

In December 2020, GN Stryker re-instated the Infiltrator Wing tradition of naming an Echelon Guardian as an honorary title given to a pilot whom they feel is an example of exemplary service and dedication to the IW. 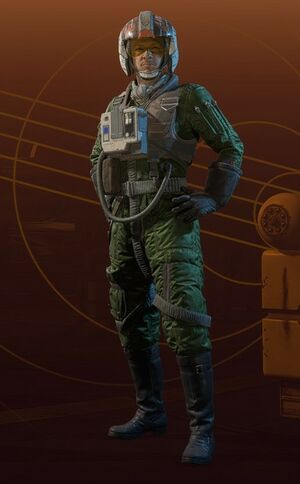