Havok first appears on the Emperor's Hammer roster in Dark Sentinel newsletter number five (5) dated January 20th, 1995 assigned to Beta Squadron, commanded by GN Peter Papp, in Flight III as the Flight Leader on the Imperial Star Destroyer (ISD) Avenger. Havok lead by example by completing any newly released missions and battles, attending the weekly club meetings on AOL, looking for ways to help the club and encouraging the members of his flight to do the same. In addition to performing the duties expected of a Flight Leader, Havok looked for ways to contribute to the then recently formed club. With approval from the command staff he designed certificates to be given out with the awarding of medals. The first position promotion to be bestowed upon Havok was that of Lambda Squadron Commander, which had been commanded by VA Thunder since its formation. Soon after he took on the added responsibilities serving as the Wing Commander's Assistant (WCA). Havok excelled in these duties and was holder of most of the high mission scores on the battle board. The next move for Havok was in Dark Sentinel 20 where he took over the command of Tau Squadron which was without a commander after Brigadier General Paladin was promoted to Training Officer. In preparations to address the growth the EH was experiencing Tau was replaced by a new squadron, Omega Squadron, on the Super Star Destroyer (SSD) Avenger and relocated to the Modified Interdictor Cruiser (M/INT) Harpax II. Although Tau was inactive for lack of members it was slated to house the most elite pilots of the EH in preparation for multi-player competitions with rival clubs. Havok worked on tactics in preparation for this as well as designing the very first rank insignias for the EH which appeared in Dark Sentinel 21 and resulted in a rank promotion to Lieutenant General.

New squadrons were created and placed on the ISD Vanguard:

A new Wing was created to facilitate the membership who preferred to fly Alliance fighters in the X-Wing game. It was called the Infiltrator Wing and located on the CRS Renegade.

The expansion created the need for additional management positions. The positions of Commodore (COM), to command a ship, and Wing Commander (WC), to command a wing, were created. Havok was promoted to the rank of Rear Admiral and to the position of Commodore of the ISD Colossus. Through Havok's leadership by example and encouragement the ISD Colossus soon earned six (6) ship citations for completion of Battles 2, 3, 24, 25, 26, and 27. Havok also designed and created Battle Medals for Battle 19, 22 and 24.<br /> The pride of commanding the excellent members of the ISD Colossus was short lived as some sudden changes occured in between Dark Sentinel 23 and 24. The first Grand Master of the Dark Brotherhood, Grand Master Kane Vader resigned. This position was replaced by the former Dark Brotherhood Liason Officer (DBLO) and current Training Officer Admiral Paladin. Havok was promoted to Training Officer (CF-5), fifth in command of the Fleet, and to the rank of Vice Admiral leaving the ISD Colossus in the hands of Rear Admiral Goatboy.<br /> No sooner than Havok could settle into this new position did the Flight Officer, Admiral Stelek, resign in order to focus his efforts as High Inquistitor on the newly formed SIM subgroup. Havok was replaced as Training Officer by Admiral Moldman, who was performing duties in the support position of Internet Officer. Havok was promoted to Flight Officer (CF-4), fourth in command of the Fleet, and to the rank of Admiral. The position of Internet Officer became the eighth command flight position (CF-8) and forced Admiral Moldman to resign as Training Officer. Admiral Yoni was promoted from Flight Officer Assistant to become the new Training Officer. Havok worked closely with Yoni, as well as with the Command Attaches, (FO:A) Rear Admiral Goatboy and (TO:A) Brigadier General Alpha, on recruitment, placement and training procedures. It did not take very long before these procedures were streamlined and operating with great efficiency and Havok was promoted to Fleet Admiral as a result of the success.<br /> At the release of NL28 the Tactical Officer, FA Tav Breil`lya, resigned to take on the position of Commodore of the SSD Avenger. Havok was promoted to Tactical Officer and was replaced by Admiral Yoni in the Flight Office. Submission, testing, reporting and distribution procedures were streamlined and with the help of his CA:TAC VA Compton and TAC:A BG Wedge the Tactical Office became outstanding. Preparations were made for the anticipated release of X-Wing vs. TIE Fighter. Issues addressed included compiling the rules of engagement for use in competition and working closely with the Training Officers, FA Melan Pyr and AD Jac, for the training of the pilots in tactics. Havok and Compton became legendary in 2v2 multiplayer combat by constantly finishing first in any XvT competition in which they participated. These Old men, as they were called by most, set the standard that motivated the pilots of the Emperor's Hammer to become the best.<br /> The Executive Officer, SA Adams, resigned and in NL33 Havok was promoted to Sector Admiral and Executive Officer leaving the Tactical Office in the good care of FA Talon. Havok oversaw the Subgroups of the club and ensured the smooth and efficient operation of the entire club. Havok built trust and nurtured healthy working relationships with every member of the club he came in contact with and practiced an open door policy. Any member, no matter of rank or position, was encouraged to contact the XO when issues could not be resolved through the normal Chain of Command. Havok also built working relations with leaders of allied and rival clubs and worked with them in the creation of multiple competitions. Befriending the leader of the New Republic was not much of a task since he and Havok used to be classmates. SA Havok watched the club grow in membership (4,330 in NL45) and quality and took great pride in performing the duties as Executive Officer.

Real life concerns would start to take their toll and limit Havok's time that he could devote to the club. Havok had a 3 year old son (FA Havok has a Son!!! - NL31) and a 4 month old daughter (There is a Great Disturbance in the Force... - NL47). It was time to step down. SA Havok resigned as XO (NL48) and named three members to succeed him. One was chosen; FA Compton became the next Executive Officer. Havok was appointed as the Imperial Sovereign Protector (ISP) of the Fleet and acted in an advisory position.

SA Havok returned to the Emperor's Hammer in October of 2009. He volunteered once again and was appointed to the position Training Officer and lowered in rank to Fleet Admiral. Working in concert with the Deans of the academies, his Command Attache and assistants, and doing alot on his own, training in the club became updated and operational. The Emperor's Hammer Training Manual was also completely reworked. Havok was soon promoted to High Admiral.

Dark Brotherhood of the Jedi[edit]

The Dark Brotherhood of the Jedi (DB) first appeared just before the release on NL10 in February of 1995. It began as a sister organization affiliated with the Emperor's Hammer. The DB merged with the EH in NL13 released on March 24th, 1995. The DB's first leader and later to become the first Grand Master was Kane Vader. Those of the EH wishing to pursue the knowledge and power of the Dark Side could not simply join; they had to be invited by the Dark Council or recommended by a superior in the Emperor's Hammer before even being considered for admission.

In late April of 1996 Grand Master Paladin resigned due to real life concerns. Havok was promoted and became the third Grand Master of the Dark Brotherhood. This position change appeared in NL32 (05/14/96). Havok's reign was short, approximately three months (NL35 09-07-96), however, he introduced a few new items into the Brotherhood, the most noteworthy being Praetors and Magistrates, which were intended to mirror the Emperor's Hammer Command Attaches and Assistants. Praetors were originally given the rank of Dark Side Adept, and formed a Praetorian Diet; which had a voice in Dark Council proceedings. Magistrates were originally given the rank of Krath Priest/Sith Warrior. At the end of Havok's reign, when he was elevated to Executive Officer of the Strike Fleet, Brotherhood membership had doubled, now boasting a little over 200 members. His reign was one of methodical expansion and refinement of their studies, with Dark Jedi establishing their own domains across the Imperial territories. He destroyed opposition without mercy, and generally reigned with marked stability. He lead by example and groomed many for advancement into positions of leadership as well as his future replacement. Havok's promotion to Executive Officer of the Strike Fleet forced him to accept too many added responsibilities and presented a conflict of interest to divide his time to Dark Brotherhood matters. Havok resigned as Grand Master to make way for the anticipated expansion and growth the Dark Brotherhood was currently experiencing. Although Havok was no longer a Dark Council member, his advice was often sought after on many issues. One major issue that arose was the conduct of Havok's successor to the Iron Throne, Grand Master Crona. Havok, along with another Dark Lord, and Master Yoni put an end to Crona's disrespectful reign by banishing him and finding a more suitable Grand Master. Havok is, to this day, haunted by the question of what caused Crona's conduct which lead to his banishment.

Havok continued in the role of unofficial advisor to any and all Dark Brotherhood members until real life concerns forced his retirement in January of 1999.

Havok returned to the Emperor's Hammer in October of 2009 and soon thereafter became familiar with those in the Dark Brotherhood and Dark Council. With the appointment of Hades to Grand Master in January of 2010, Havok found himself once again in an advisory position as Praetor to the Grand Master (P:GM). In August the position of Master-At-Arms once again became vacant and, seeing a need, Havok volunteered to fill the position and handle the duties. To be continued...

Dark Brotherhood of the Jedi Career[edit] 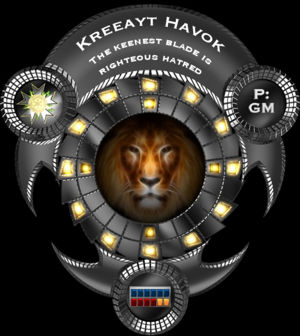 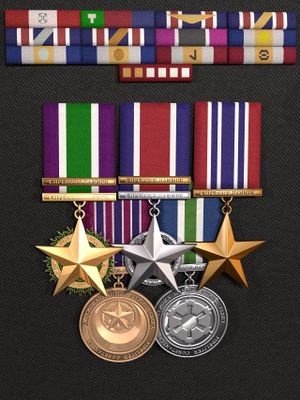 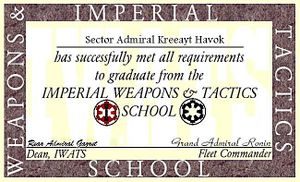 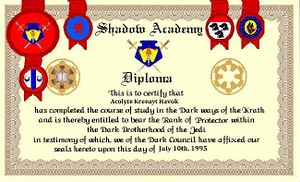 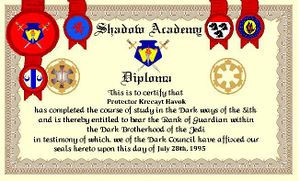 Training can be accessed HERE and clicking on the Training tab. 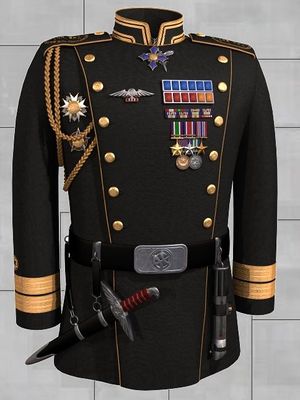 On the right you can view Kreeayt Havok's ceremonial dress uniform. He wears it proudly during official functions such as promotion, graduation, award and medal ceremonies, formal meetings and inspections. His Command Staff designation, Sector Admiral rank insignia, merit medals and awards, and Fleet Commander's Honor Guard (FCHG) wings are displayed. Havok has been wearing his lightsaber ever since he attained the rank of Dark Jedi Knight in the Dark Brotherhood.