The Emperor's Hammer TIE Corps utilises standardised uniform templates, just like the Empire did. There are three basic types of uniforms regularly worn by Emperor’s Hammer officers – flight suit, duty uniform, dress uniform. Which uniform is worn depends on the type of duty or occasion. All of them can be rendered by TIECorps Tailoring Tool 3. You will need a non-TIE Corps utility, POV-Ray, installed. Unless allowed otherwise by the Strategic Operations Officer on a case-to-case basis, all uniforms must be rendered using the TIECorps Tailoring Tool 3.

All uniforms must be approved by the Strategic Operations Officer before being displayed on a pilot's profile. 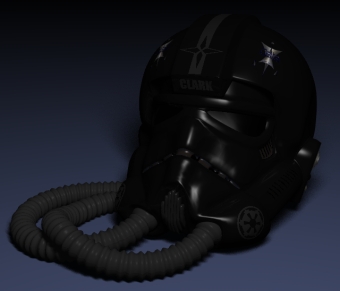 The uniform of a combat pilot is thoroughly utilitarian. The only marks of distinction are the rank insignia and position badges. This is the uniform worn while on combat missions in a single seater fighter craft.

It consists of a pressure suit and helmet. By default both are black, with the helmet sporting a silver Imperial symbol (as opposed to the white symbols used by other Imperial pilots) and possibly a squadron patch. Pilot's callsign is indicated on the front of the reinforced part of the helmet. Since TIE Corps pilots are considered the most elite group of pilots, they are allowed to use non-standard colours and patterns on their flight suits in order to flesh out their individuality.

Tempest's Tailoring Tool 2 renders only helmets and as such only helmets (without the flight suit) shall be accepted in the pictures uploaded to your profile.

Position badges are on the front part of the helmet, over the pilot's callsign. The symbols are:

Higher positions do not have helmet badges as those positions are considered non-flying.

Rank insignias run over the top and front part of the helmet, starting from between the pilot's callsign and the position badge. Their meaning is:

Higher ranks do not have helmet insignias as those ranks are considered non-flying.

A comprehensive guide of the ranking system along with pictures of each rank can be found here. 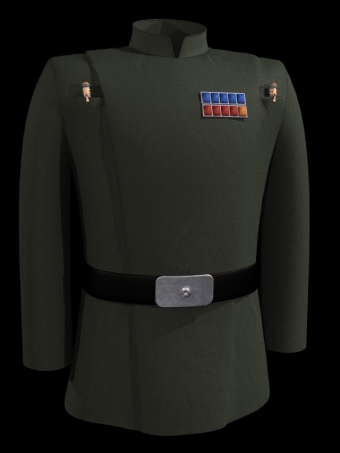 The duty uniform is that which is worn while on regular duty aboard ship, on stations and at other Emperor's Hammer facilities. It is the standard everyday uniform of all Emperor’s Hammer officers. It follows the standard Imperial pattern of duty uniforms.

It consists of an olive grey double-breasted tunic and trousers, a matching cap and black durasteel-capped boots. The only distinctions are the rank insignia on left breast and code cylinders, indicating position, in the pockets.

A code cylinder is a common security device in use by Imperial officers. Each cylinder contains its user's personal security clearance codes and data, and their placement and color combination indicates one's position in the Emperor's Hammer or the TIE Corps. The system is as follows: 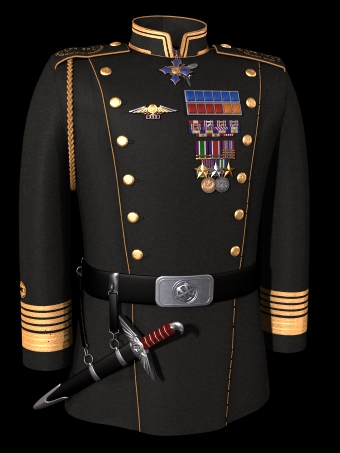 The dress uniform is usually worn on official occasions, while attending important military events or celebrations and also during any formal occasions when officers wearing it are representing the Emperor's Hammer. It can be also used for non-military affairs, like light social occasions, dinner engagements and similar.

It consists of a dark double-breasted tunic with matching trousers and durasteel-capped boots (exception: Grand Admirals wear white dress uniforms). The tunic sports numerous golden elements, such as buttons, shoulder pads and symbols on the sleeves. Lining colour depends on the ship a member is based on – ISD-II Warrior officers used red, ISD-II Challenge blue, ISD-II Subjugator violet whereas the MC-80B Redemption members had green lining. The currently active vessel, the ISD-II Hammer, has a grey color theme. Members of the elite Praetorian Squadron used silver lining and all members of the Admiralty Board and Command Staff use golden lining. The rank insignia is worn on left breast, whereas position is indicated by the sleeve symbols. All medals are displayed – merit ones in full on left breast, with ribbons representing other medals just above them. The Imperial Cross and Grand Order of the Emperor are worn about the neck, while the Medal of Honor and Order of the Renegade are displayed on the right breast.

Fleet Commander's Honor Guard insignia and flying wings are also present. The squadron patch may be put on both of the sleeves, near the shoulders. Recipients of the Grand Order of the Emperor may display their ceremonial dagger on the dress uniform, while pilots who are also Dark Brotherhood members and have attained a rank of Dark Jedi Knight or higher may have their lightsabers with themselves.

Golden bars with different thickness on the uniform's sleeve indicate the position of the member. The symbols are:

The aiguillette, in gold cord, is worn on the right shoulder and also symbolizes a member's position: