Pellaeon was born on Corellia, the capital palnet of the Corellian system, which included Selonia, Drall, Tralus and Talus. Collectively, the planets of the system were known as the Five Brothers. As the largest planet and the closest to Corell, Corellia was often called the "Eldest Brother" or the "Eldest." The family was upper-middle class, his parents got an excellent running trade business. He got his first speedbike at the age of 5. 2 Years later at the age of 7, his parents were killed by Rebels during a trade transport of high tech weapons for the Empire. Pellaon swore to take revenge. 11 hard years lay ahead Pellaeon. He lived in the street and not all of his actions were legal to caught something to eat. At the age of 18 he was old enough to join the Imperial Navy. A dream came true. Now the would be able to take blood from Rebels for his parents death. After 3 years education and training Pellaeon finally got his pilot licence at the age of 21. He served 4 as a pilot instructor on the PLT Deadalus, meanwhile studying Grand Admiral Thrawn's tactics, before he got his officer's patent. Pellaeon was promoted to Sub-Lieutenant an transfered to Fury Squadron on board the SSD Avenger. His CMDR noticed soon his flying and fighting talent. Captain Juve appointed Pellaeon to his Flight Leader of Flight 3. After serving approximately 1 year in Fury Squadron, Pellaeon transfered to Talon Squadron on board the new opened ISD Subjugator. Only 2 weeks later he got an invition to the prestigious Avenger Elite Squadron (AES) on board the VSD Aggressor. Pellaeon accepted the invition and served approximately one and a half year there as an elite pilot. During this time he was the Tactical Coordinator of XvT in the Tactical Office. Meanwhile beeing Major, Pellaeon transfered back to the SSD Avenger, having his Avenger Black Shirt in his baggage, and became Squadron Commander of Trapper Squadron. After over 10 months as Trapper CMDR Lieutenant Colonel Pellaeon was forced to step down to health issues, but he continued his duty as a Flight Member in Trapper Squadron. 8 months later Pellaeon was forced to transfer to the M/FRG Phoenix to Reserves, after his attending medical officer found out, that his disease was caused by an artificial rebel virus. 3 months later Pellaeon rejoined Trapper, but his tour of duty ended after only 5 months again in the hospital ward. This medical attendance lasts over 7 months. Finally Pellaeon was cured and freed from the virus and joined as a Flight Member Red Squadron on board the MC80B Redemption. Short time on board the Redemption Pellaeon was appointed as Wing Commander of the Moon Calamari Cruiser. 3 Months later, proved his skills an abilities as a commanding Officer, Pellaeon was promoted to Rear Admiral and named as Commodore of the Redemption. He served as a flag Officer over one and a half year before he resigned and entered his retirement pension on board the M/FRG Phoenix. On board the Phoenix the old Vice Admiral worked on the Encyclopaedia Imperia and assistes the Logistics Officer in his work. But it was not enough for him. He decided later to give his admiralty badge back and joined Alpha Squadron on boad the ISD II Hammer as a Colonel. But this was not a long duration. 4 Months later Admiral Elwood the Brave was appointed to TCCOM and nominated Pellaeon as his new Strategic Operations Officer. Pellaeon still works at this job and currently holds the rank of Fleet Admiral.

Pellaeon joined 06/10/2001 as an Apprentice the Dark Brotherhood, recruited by Chaos Angel, his former Squadron Commander of Fury Squadron.
The young initiate learned quickly how to use the dark side of the force. He raised fast through the ranks up to Sith Warrior.
In October 2002 Pellaeon got his first Sith Commander position as the Battleteam Leader of Hyperion Flight. He was in this position until the Exodus of the Dark Brotherhood forced him to the Rogues.
Soon Pellaeon came back and joined Stingray Squadron as a Battleteam Member. Sadly only 2 months later he was forced to retire again.
Almost 3 years later Pellaeon rejoined Singray Squadron und the command of Protector Stryker. 4 months later Stryker resigned and Pellaeon once again rose up to Battleteam Leader.
01/25/2007 he resigned as Battleteam Leader to concentrate his energy on the command of the MC80B Redemption as Commodore. At the end of the year 2007 Pellaeon resigned finally from all positions in the EH and joined the reserves.
Over 5 years later, July 2013 he joined Clan Drakonan as a Battleteam Member under Consul Crsepe. One year later Pellaeon was appointed to the Praetor of the Grand Master. He still holds this position. Middle of September 2014 he stepped up as Battleteam Leader and commands up to now once again Hyperion Flight. Short after that he was promoted to Sith Battlemaster. After his successful tour of duty as Battleteam Leader he rose again in the Sith hierarchy and became Proconsul of Clan Drakonan. He was meanwhile appointed to Consul. Pellaeon currently holds the rank of a Dark Side Master. 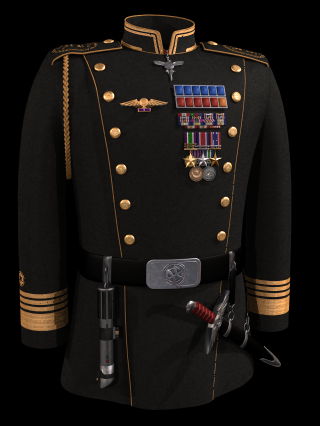 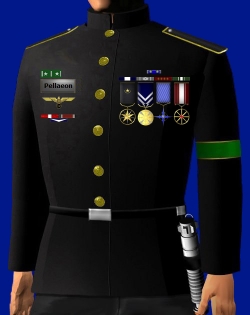 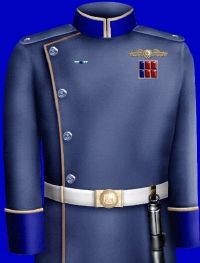 Pellaeon served as Commodore aboard the Redemption for almost 1 and a half year. He also served as a Wing Commander on the same ship. Currently Pellaeon serves as Strategic Operations Officer in the TIE Corps.